Naruto: Rise of a Ninja

Naruto: Rise of a Ninja is an open world fighting hybrid, with elements of role playing. It's based on the popular anime series Naruto.
Xbox 360

Naruto: Rise of a Ninja puts you in the shoes of the series' protagonist,  Naruto Uzumaki, and follows the first 80 episodes of the anime series.  The game spans from when Naruto becomes a genin, and concludes with the Chunin Exam story arc. The story is told through textual conversation and scenes from the anime itself.  Ubisoft Montreal developed a direct sequel,  Naruto: The Broken Bond.

Throughout the course of the game, Naruto will complete missions for villagers and key characters, such as Kakashi and the Third Hokage.  Missions typically range from collecting, racing, playing hide-and-seek with Konohamaru, delivering ramen, and defeating enemies. Much of the game takes place in the  Konoha, the Village Hidden in the Leaves, and its surrounding areas. This lends the game its free roaming aspect; as the story progresses, Naruto is sent further afield to complete missions.  Naruto develops many abilities that assist him in traversing the landscape. These include walking on water, walking up walls, dashing, double-jumping and developing his signature Shadow Clone technique.

In addition to traversal, the other key aspect of Rise of a Ninja is its fighting system. It is simple but robust, with basic combos and counters (called Substitution in-game) augmented by characters' jutsu attacks. The game implements random fighting matches throughout the world. Opponents vary in difficulty, and boss encounters are especially demanding.  Victory is determined when one member is knocked out, although the resilience of bosses can make for multiple encounters.  Each match victory gives Naruto additional money and experience which can be exchanged in Konoha for new moves, better statistics, and better items.

In addition to the single-player campaign, Naruto: The Rise of a Ninja supports online multiplayer through XBox Live.  The two modes available are quick match and "Forest of Death", which allows you to compete against other players in order to win the Chunin Exam in a tournament style structure.  XBox Live also enables downloadable characters and venues. 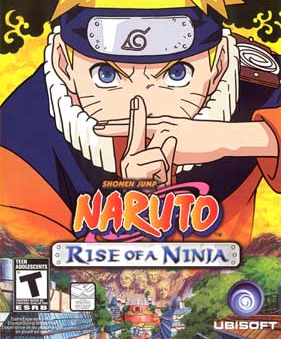