Fight off the flying demons in this Phoenix-like shoot 'em up from Imagic.

Demon Attack is an early shoot 'em up where the player must defeat waves of aliens with a laser cannon. Unlike other early shooting games such as Space Invaders, Demon Attack does not give the player obstacles with which to hide from enemy attack. Also, compared to Space Invader-type games, there are fewer aliens on screen at any given time but the alien sprites are bigger and more elaborate. The cannon also moves much faster, and has a smaller hitbox making it easier to evade enemy fire.

The player controls a single cannon at the bottom of the screen which can move left and right. Up to three Demons will warp into existence and float around, with the lowest Demon dropping missiles. Destroying a Demon will cause a new one to warp in until the end of the combat wave, at which point destroying the remaining Demons will clear the stage.

As the stages progress, the aliens become faster and change appearance, and some will split in half when struck instead of being destroyed. If one half of the lowest Demon is destroyed, the other half will fly down towards the cannon in a kamikaze run. Thanks to its small size, it can be difficult to hit before it reaches the ground, though it can be evaded if there is enough room to the side. Once both halves are destroyed, the middle Demon will float down to take the place of the lowest, and if one half is destroyed the remaining half will immediately fly down towards the cannon. Later demons also drop missiles that follow them, letting them sweep their fire across an area when they move.

The first run of cartridges stopped gameplay after the 84th wave, supposedly by design. Every run of the cartridges thereafter allows the player to 'wrap' the score and gameplay continues until all lives are lost, though the difficulty does not increase.

There two multiplayer modes - first, alternating play stage-by-stage to compete for score, and second, co-operative play with the cannon changing color to represent the controls switching between first and second player at pre-set intervals.

The other option allows the cannon's shots to be guided by the motion of the cannon itself, much like the attacks of the later Demons.

Atari itself filed a lawsuit against Imagic, claiming it was too similar to Phoenix. Imagic and Atari settled out-of-court, and Demon Attack went on to sell well.

By the end of 1986, developer Imagic was no longer a going concern. Its intellectual properties, including Demon Attack, have been held by Activision since that time. The game was included in the PS2 and PSP version of the Activision Anthology collection. 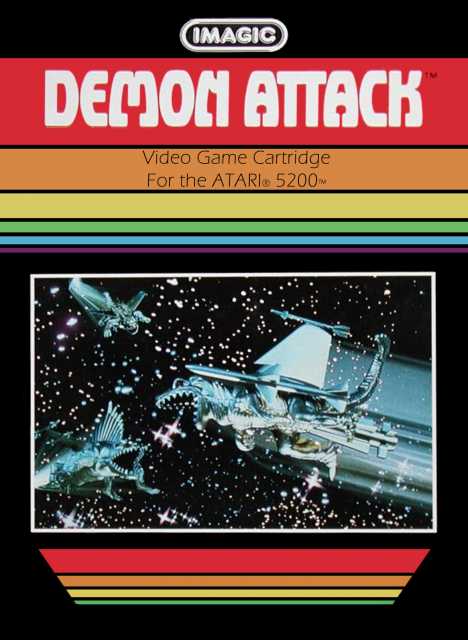