A handheld adaptation of the Shanghai series of mahjong solitaire games.

Shanghai Mini is a mahjong solitaire game developed by Success and published by SNK (under license from Activision) for the Neo Geo Pocket Color in Japan on July 29, 1999, followed by an overseas release in 2000. It is backwards-compatible with the original Neo Geo Pocket.

A handheld adaptation of the Shanghai series, Shanghai Mini includes three modes: Classic (standard mahjong solitaire), Tournament (a single-player campaign version with time-limited arcade-style levels), and Dynasty (a two-player multiplayer mode, either against a CPU or against another handheld, that is reminiscent of the "2-Player Taisen" mode from Shanghai III). 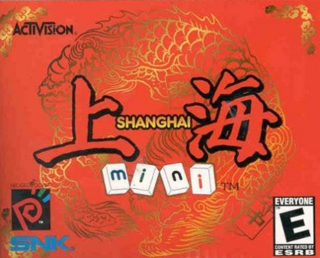