Spirit of Excalibur drops the player in to a power vacuum in England following the death of King Arthur. You control Constantine, who is King Arthur's successor, and any knights he is able to recruit. Real-time combat, one-on-one and between armies, are required to defend the realm of Camelot.

Commodore CDTV
Spirit of Excalibur is an adventure/strategy game based on Arthurian legend.   It uses elements from Malory's Le Morte Darthur, John Boorman's film Excalibur, and modern-day retellings of the story.  Continuing where the traditional tale ended, Spirit of Excalibur depicts a new king and a new group of Knights of the Round Table attempting to end the threat of the sorceress Morgan le Fay once and for all.

Similar to J.R.R. Tolkien's War in Middle Earth, Spirit uses an overhead map for character and army movement, and a close up side view to show specific locations and dialogue.  It also has an army combat screen, showing all fighting troops in a medium overhead view.

The game is divided into five chapters.  Within each chapter the player must guide characters between locations to fight, gather allies, or collect items.  Because items (such as strength potions or alchemical reagents like eye of newt) carry over between chapters, it is important to gather as much as possible as early as possible.  The chapters provide specific challenges: for example, in the third chapter the king and most of the Knights of the Round Table are trapped in Camelot, and the player must use their limited forces outside the castle to free them before invading Saxons conquer England.

Though well regarded, the game was considered so difficult that Virgin eventually began to package the hint book with the boxed game. 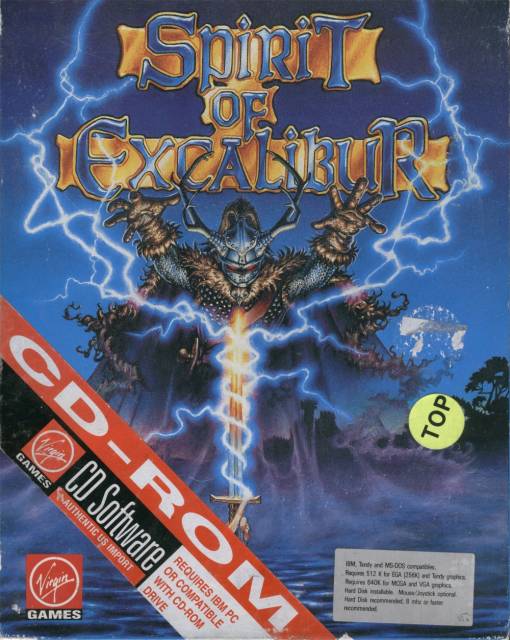