Simon the Sorcerer II: The Lion, the Wizard and the Wardrobe

A point-and-click adventure game. Simon is transported by a wardrobe back to the fantasy world.

The evil wizard Sordid is back again, after being brought back to life by Runt, a young boy who wants to become a sorcerer, who lives with his unapproving father. His father finds him reading a magic book in bed and in anger throws the book on the chalkboard pentagram the floor. This causes the book to catch alight and summons Sordid, who now seeks revenge on Simon the Sorcerer. Sordid promises Runt that he can become his apprentice if he helps him capture Simon.

Meanwhile, Simon lives happily in his own world and completely unaware of Sordid's return. Sordid sends a wardrobe to trick Simon back to the magical world, but Sordid mistakenly made the wardrobe bring Simon to the doorstep of Calypso's Magic Shop, the wizard who Simon rescued in the first game. Calypso tells Simon that in order to return home he must find the wardrobe's power source called Mucusade.

The gameplay is very similar to the first game, continuing to use a point-and-click interface. The only difference is that there are now icons to represent possible verbs instead of words. For example, the first game had a 'talk to' button, but it has been replaced to an icon of a mouth.

The voice of Simon is provided by Brian Bowles who replaces Chris Barrie. Simon's appearance also changes in this sequel with red wizard garbs replacing the purple set from the first game. Simon has also grown a pony-tail in the years in between the two games.

The Secret of Monkey Island Leisure Suit Larry: Love for Sail! Broken Sword: The Shadow of the Templars Lure of the Temptress Zak McKracken and the Alien Mindbenders The Legend of Kyrandia The Book of Unwritten Tales 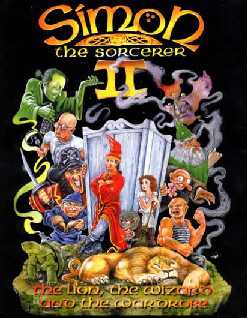