A spin-off of the Shining series and the first to be on a non-Sega platform. The game is a dungeon crawling action RPG exclusive to the Game Boy Advance game.
Game Boy Advance

Release in 2002 in Japan and in 2003 in other regions, only for Game Boy Advance, Shining Soul is the seventh game in the series and it is an isometric dungeon-crawling action RPG.

The game takes place in Rune

makes the player take the role of a warrior torn between two directly opposing groups: The Dark Dragons and the Shining Fleet. The game lets the wizard choose to pertain to one of four classes: fighter, wizard, archer, or dragonute. The game allows high customization of the character, including weapons, clothing, color schemes, armor etc.

The game allows link-up play with up to four players, to fight in cooperative combat. The gameplay presents itself as a typical dungeon crawler ARPG, with the objective of collecting gold, clothes, weapons etc. as well as constant hunting for experience points to level up. The game has a sequel called, simply Shining Soul II, in which the core gameplay remains practically the same but many extra features ($ new classes, collectible cards, arena, side quests etc.) are added.

Slow - Spell that slows down enemies

Boss: Titan Fighter - a mighty war machine that shoots energy beams out of his eye-like sockets. After the armor is destroyed you fight the ball-formed core that uses rolling attacks.

Boss: Bulzam - the first dragon general. Teleports himself around the room and shoots multiple fireballs.

Name: Forest of Another World

Boss: Michaela - the second dragon general. Uses her own replicas to attack the hero with ice missiles. 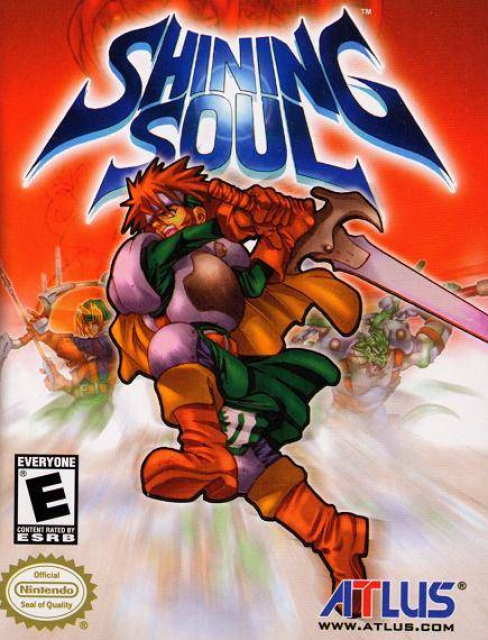