Aliens turned Tommy's world upside down. It's about time he returned the favor.

Prey is a Sci-Fi FPS made by Human Head Studios, using id's Doom 3 engine. The game features the traditional shooter banter, as well as some unique puzzles. To solve these puzzles, you need to walk on the ceiling, walls, and go through portals to complete. Also the game had an online multiplayer component and a soundtrack composed by Jeremy Soule, the man behind Oblivion and Guild Wars' soundtrack. Marketing for the "sequel", Prey 2, would imply that the title of the game referred to the fact that the aliens were hunting Tommy throughout the Sphere, but this is not the case, and in truth, it referred to the fact that the aliens intended to consume all of humanity.

The game begins, oddly enough, in a dank, dirty bathroom. The main character Tommy is gazing at himself through the grime covered mirror, and as you venture out into what appears to be a bar, you meet the supporting roles in the adventure. These two support characters are Jen, Tommy's girlfriend, and Tommy's grandfather Enisi. Tommy speaks to Jen about leaving their Native American reservation and pursuing other things. After a quick scuffle between Tommy and a few of the bar's patrons, the bar's walls begin to shake and the roof is torn off. Green tractor  beams shoot through the open ceiling and Tommy, Jen and Enisi are pulled up into the air.

Tommy wakes up and is strapped into a moving coffin-like contraption. He has his grandfather and girlfriend in sight, and his grandfather tries to calm him and Jen down. Along the ride, Tommy sees strange alien lifeforms, and it appears that these aliens are performing tests on humans. Just as the characters are about to be split up, a strange man seems to detonate a bomb, and de-rail Tommy's cart from the rail system. This is when the player assumes control of Tommy, and begins to traverse the horrible alien spaceship. Tommy makes his way throughout the ship, and encounters strange things like anti-gravity walking strips, and portals. After some exploration, Tommy witnesses the brutal killing of his grandfather Enisi. After this, Tommy becomes extremely emotional and vows to rescue Jen.

Navigating through the ship, Tommy comes to a narrow and shoddy bridge.It collapses when he tries to cross it, and Tommy "dies". Instead of being dead for good though, Tommy is transported to a spirit world. In this spirit world, Tommy meets his grandfather Enisi. Enisi explains how his, and the spirits of his ancestors live on in this spirit world, and also tells Tommy that the spirit of his childhood pet bird Talon is his guardian. After some quick tutorials on how to spirit project, Tommy is sent back to the world of the living.

Tommy continues through the ship, and meets the leader of the resistance against the aliens, Elhuit. She explains to Tommy that the Mother, whatever that is, needs to be destroyed in order to destroy the ship and it is operations, and Tommy accepts the task. Along the way to the final controntation, Tommy is confronted by Jen, who has been grotesquely spliced onto the body of a hideous monster over which she has no control. After defeating the monster, Tommy is forced to mercy-kill the suffering Jen to prevent the monster from reviving. When Tommy finally confronts the Mother, it is revealed that she is human, and that she had defeated the previous Mother and assumed the role. Now, centuries later, she took a special interest in Tommy because of his Spirit abilities and was training and testing him all along to take her place, to rule the Sphere as its "Father".

An enraged Tommy does battle with the Mother, and upon the brink of death, she forcefully begins to fill Tommy's mind with the vast knowledge that she possesses, somehow teleporting him into her chamber at the very heart of the Sphere. Overwhelmed with the power, Tommy briefly considers becoming the Father, until Enisi contacts Tommy and advises him to not accept it. Tommy rejects the power, and destroys the Sphere by flying it straight into the sun. He returns to the spirit world, and sees Enisi and Jen, who reveal that he isn't dead yet, as they protected him during his intended sacrifice. They return him to Earth, to live his life until the day that he will see his grandfather and Jen again. However, some time later, when the bar has been rebuilt and is now run by Tommy, Elhuit appears to him, to tell him that his adventure is just beginning, and opens a portal to an unknown destination.

Prey's engaging and fearsome story develops throughout the course of 22 levels, or chapters.

Before the aliens begin to beam everything up, you can walk over to the game machines and play them. There is a blackjack machine, a poker machine, and a game called Rune Man, with graphics patterned after Rune, another game by Human Head studios. Rune Man is very similar to Pac-Man except is features a viking helmet, and the pickup items are runes. Even if you miss the opportunity to play these, you can find them at later points throughout the game, strewn about the alien ship.

Jukebox
Before the aliens begin to beam everything up, you can also walk over to the jukebox and select a song to listen to, and change the volume as well. There are many songs from real artists like Judas Priest, MXPX, Halifax, etc. You also re-visit the torn-up bar at a later point in the game and the jukebox is still functional, but stuck on the song "Don't Fear the Reaper", at full volume. Also note, Blue Oyster Cult's "Don't Fear the Reaper" was not a song that could be chosen prior to the opening events of aliens attacking the bar, only when it happened did the song come on.

Prey's multiplayer consists of two modes: Deathmatch and Team Deathmatch. The multiplayer is standard FPS fare and utilizes all of the features of the single player mode such as the "Spirit Walk" in which Tommy exits his body as a Ghost-like entity to find hidden paths and weapons. However, while in spirit walk mode, the player's body is left vulnerable to attack and can only be used for a limited amount of time. Though there were many free downloads in the form of maps and character skins for multiplayer, the community quickly dispersed as the game waned in popularity. It was regarded by many critics as "tacked on" and "unpolished".

Prey was officially announced in 1995, eleven years before the game came out. Tom Hall worked on the original design of the game but was replaced by Paul Schuytema after he left to form another company. Hall envisioned an alien abduction that the story would be based around; the new team kept that concept but changed the setting to a huge space ship inhabited by the Trocara and the Keepers. The protagonist was to be a stereotypical Native American named "Talon Brave".

At E3 1997 and E3 1998, the development team showed off some of the game's concepts including the use of portal technology and highly destructible environments. These features impressed those that saw it and it received much acclaim. At this point in the development, it seemed like 3D Realms was on its way to releasing a great game. The visuals were looking great for its time and people were confident in the studio due to the successful Duke Nukem 3D.

Unfortunately, it didn't last. Devastating technical issues started coming up, and Prey fell apart. When Schuytema's version of Prey was officially done for, 3D Realms brought on Corrinne Yu in November 1998 in an attempt to revive the game. Despite their efforts, this new version of Prey also failed, and the project went on hiatus in 1999.

In 2001, the portal technology that the studio needed was already being used in many other titles, so all 3D Realms had to do was license it instead of creating their own. Rumors began circulating the following year that 3D Realms was making Prey, but the game was kept a secret until 2005 when 2K Games announced the game. The game was finally released on July 11, 2006, using the id Tech 4 engine and a new protagonist named Tommy.

Prey was technically in development since 1995, but had been cancelled for several years until the project was restarted in the early 2000s, ultimately being released on the Xbox 360 and PC. With all of this build up, it's fair to say that critics and gamers alike were waiting to see what the game had turned out to be. The critical reception of this game was varied, but overall, the game received average reviews. It received a 79 out of 100 on metacritic for the 360 version, while the PC version got a 83 out of 100, but both scores are favorable. Although the portal technology used in the game, allowing a player to walk into a portal in one place and instantly emerge somewhere else, was revolutionary at the time, it was unfortunately eclipsed just a year later by Portal, which featured the exact same technology, except it also gave the player the ability to place the portals wherever they wished. 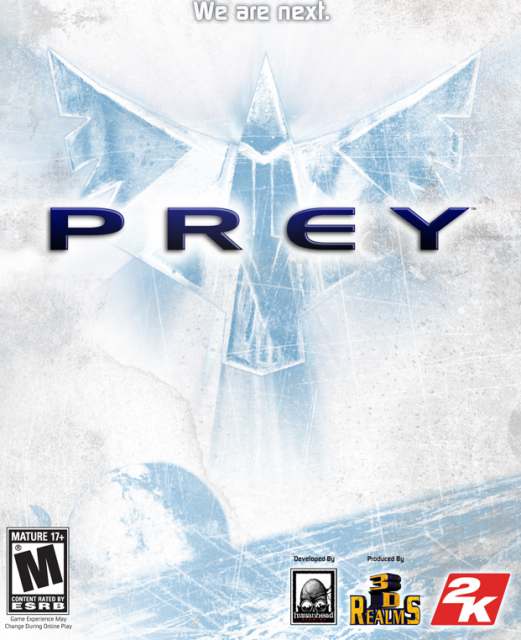