Players organize blocks of the same color to make them disappear.

Players line up colored blocks into various patterns to make them disappear. Atari Games originally released it as a coin-op follow up to Tetris, which they were tangled in a legal dispute about at the time.

There are actually two Genesis versions of the game. The first, released only in Japan, was ported by Namco who also published the game. The second was the standard Tengen version available on other platforms.

A Klax is the simplest pattern of three matching blocks. Each pattern is a multiplier based on the number of Klaxes it is worth. Four matching tiles in a row, as an example, are worth two Klaxes. Points are scored based on pattern size. The more blocks which are simultaneously removed, the higher the score. Empty space at the end of the round is also scored. After each round, the player may skip 5 or 10 stages, which results in a higher score multiplier, and more available drops. Difficulty is similarly ramped up faster. Stages have unique challenges, such as forming a specific pattern a number of times ("complete 5 diagonals").

Failure to catch any block results in it falling down the gap between the conveyor belt and playing area and one drop being used. Once all of the drops are used, the player is given a chance to continue. Otherwise, the game ends. (In the original coin-op, the game ends when all drops are used.) Klax has 100 stages, and ends after completing the final stage.

The NES version of Klax includes Blob Ball under the title screen menu "stuff", a single-player pong-like minigame. The player controls a paddle over a wall of spikes, and deflects a blob to the opposite wall. Either button on the control pad changes the blob's direction unpredictably. There is no score, and unlimited lives. Programmer Dave O'Riva commented in an interview with The Warp Zone:

Blob ball was just a lark. I wanted to have some humorous stuff on the cartridge, and the idea for this Pong-like "game" just sprang up. Most of it was coded in one evening, and then refined in "spare time" over the next week. The most common observation on it at the time was "I can't believe they let you ship with that." 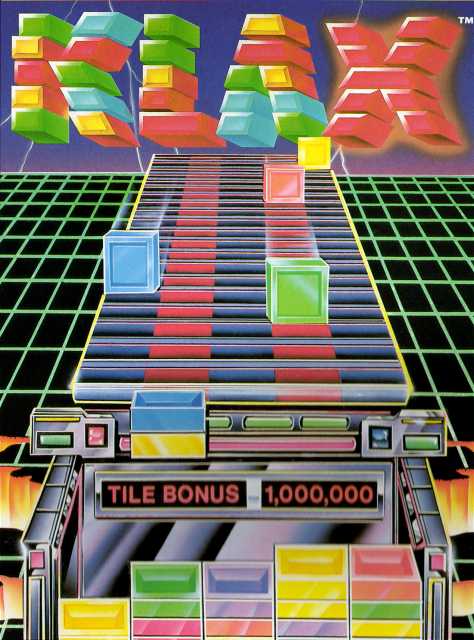