One of the earliest and most famous "mahjong solitaire" games, Shanghai is a puzzle game where players clear a formation of 144 mahjong tiles by matching unrestricted pairs.

Shanghai is a mahjong solitaire game developed and published by Activision for the Apple Macintosh on July 1986.

An official adaptation of the 1981 PLATO game Mah Jongg (from the game's designer Brodie Lockard), Shanghai is one of the earliest games in the genre (leading the genre itself to sometimes be called "Shanghai"). It is notable for utilizing the Macintosh's mouse control and monochrome display effectively.

Players are given a formation of 144 mahjong tiles stacked in a particular five-level formation (which is later known as either "Turtle" or "Shanghai") and are tasked with removing pairs of matched, unrestricted tiles to clear the board.

The game includes three game modes: Solitaire (a single-player mode with no scoring), Tournament (where multiple players take turn playing a full run of the same pattern, forming a leaderboard based on their remaining tiles), and Challenge (where two players take turns finding matching pairs).

It was later ported to numerous console, computer, and handheld systems of the late 1980's, and later received a direct sequel in 1989 known as Shanghai II: Dragon's Eye. It also received numerous arcade ports, usually released by SUNSOFT.

A single-player mode with no scoring, Solitaire Mode allows players to pick from numerous pre-made patterns or generate a random pattern (which may be unwinnable).

This mode allows three special aids to help the player: undoing moves, showing all available moves, and displaying tiles hidden underneath other ones.

Intended to be played by multiple players asynchronously, Tournament Mode allows players to play through the same random pattern over and over again, attempting to get higher on the leaderboard (which is determined solely by the amount of tiles remaining, in ascending order).

Additionally, players can enable a time limit in this mode that ends their playthrough once depleted (set at either 5, 10, or 20 minutes).

A two-player multiplayer mode, Challenge Mode has both players taking turns finding matching pairs, with a timer for each turn (5, 10, 20, 30, or 60 seconds) that ends the player's turn prematurely when depleted.

When the board is cleared, when no move moves can be made, or when both players pass their turn four times, the game ends and both players are scored based on how many pairs they remove.

The game received numerous official home ports from 1986 to 1990. Rather than mouse controls, most ports use a "digital mouse" where the pointer is controlled using the joystick, arrow keys, or directional pad.

Some ports retain all the features of the original, while others are restricted to the game's Solitaire mode.

The game received an official arcade port in 1988, developed by Success and released by SUNSOFT. It uses a joystick to move the cursor (however, it now snaps onto tiles, making it easier to navigate) and features both a dedicated turn timer (which ends the game after the player fails to make a pair within a certain time), a hint system (where players have limited amount of hints, shown as "riichi tokens"), and a daily leaderboard (based on how many tiles were matched).

This version later received multiple sequels, with Success themselves developing the 1989 Shanghai II, the 1993 Shanghai III and the 1994 Shanghai: Triple-Threat. Other arcade versions include the 1991 Super Shanghai: Dragon's Eye, the 1998 Shanghai: Matekibuyuu, the 2000 Shanghai: Shouryuu Sairin, the 2002 Shanghai: Sangoku Pai Tougi, and the 2005 Super Shanghai 2005.

This version was later digitally re-released for the Wii (as a Virtual Console Arcade title) exclusively in Japan by D4 on September 4, 2012. 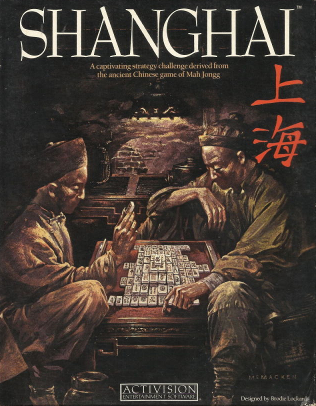