A "cute 'em up" originally released in Japanese arcades in 1991. It was the first game in the Cotton series. Driven by her sugar cravings, Cotton helps the fairy kingdom remove the dark mist that is terrorizing their dreamlike world.

Fantastic Night Dreams: Cotton is a shoot 'em up and is the first in a series of games starring the titular character, Cotton. Featuring entertaining cutscenes (in some versions these are voiced, as well!) it had a relatively well developed story in terms of shoot 'em ups for the era.

Developed by Success Corp., Cotton was originally released in the Arcades by Sega in 1991. It was ported to the PC Engine CD-ROM2 in 1993 where it was given a whole new redbook audio soundtrack. This version was ported to the US later the same year. It was also ported to the Sharp X68000 Japanese home computer that year as well. Later versions would hit the Neo Geo Pocket Color and the PS1: Cotton Original, the PS1 version, uses the soundtrack of the TurboGrafx-CD version and the graphics of the original Arcade game, making it a "best of both worlds" edition of the game.

Silk the fairy acts as an "option" for Cotton and follows and attacks with her; Cotton can get additional fairies. Cotton also has two types of shots, a basic forward magical attack and magical "bombs", resembling bubbles she drops at an angle in front of her. Various types of magic serve as Cotton's powerful special attacks; these are limited by the number you have in stock.

Most power ups take the form of gems (宝石/houseki) dropped by enemies; these can be shot by Cotton to change their color and consequently the effect they have when picked up. Larger gems are (of course) worth more of whatever the particular color grants. Most special items (like the fairy stones and bomb power ups) are carried by strange statues seen throughout the game. Don't destroy their heads when they leave the screen; they'll come back holding a power up!

A wave of darkness from the world of monsters has tainted the light prism which brings light and happiness to the land of fairies; on top of that, the only thing that can restore the prism are seven magical candies called willows... which happen to have been stolen by the strongest of the monsters! Silk is sent by the fairy queen to find help, but all she manages to find is a strange, air-headed and mildly insane witch named Cotton. Silk uses Cotton's obsession with candy to trick her in to retrieving all the willows and restoring light to the fairy kingdom; throughout the game she frequently has to prevent Cotton from eating the willows. 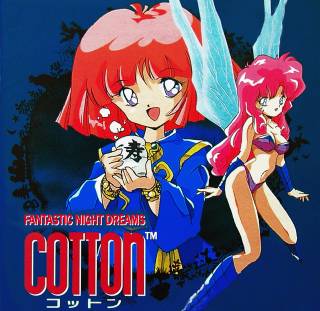