Released on November 22nd, 2006 on Xbox Live Arcade by Gastronaut Studios Small Arms is a 4 player arena fighting game not unlike the popular Super Smash Bros. series, but with a substantial focus on projectile weapons. The game features 12 characters (each with a unique weapon), 8 stages and 4 single player modes in addition to multiplayer (both local and over Xbox Live.) One downloadable content pack featuring new stages, characters and achievements was later released for the game.

The characters in Small Arms are the result of inhumane research experiments by Dr. Soandso -- an assistant professor at Toledo University. Dr. Soandso was awarded a contract by the Military to create the perfect solider through a mix of genetic engineering and cybernetic technologies.

Soon afterwards Soandso was dishonorably relieved of his position at the university due to his cruel experiments. After being fired from the university, Soandso wasted the contract money on a pyramid scheme and bad real estate investments --  soon after, one month before his deadline to create the perfect soldier he scraped together all of his unscrupulous research and created a band of misfits using cataloged DNA and household appliances. Appalled by Dr. Soandso's creations, the military covered up the problem by dispersing the mutants across time, never to be heard from again (or so they thought.)

Small Arms uses a hybrid fighting/shooting system with 3D characters battling out on 2D stages much akin to Super Smash Bros. The controls are a Geometry Wars esque dual-joystick control scheme to fire weapons, the left stick moves the character and the right stick is used for aiming. And while projectile weapons are largely focused on there is also a (very simple) melee system. Additionally, each weapon has a unique primary and special fire to take advantage of -- and while every weapon is unique to a certain character they will randomly appear during matches and can be picked up and used by any character. Weapons require ammo, which in-game the ammo pick ups are depicted as large batteries which depending on the size of the battery will restore either some or all ammo to the current weapon.

* Denotes this is a DLC arena. 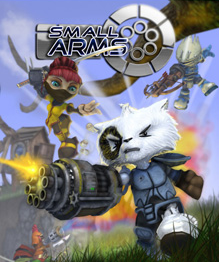