Kate Walker, a successful lawyer, travels to find Hans, the sole heir to a factory and eventually ends up on a journey to find him and the once thought to be extinct Mammoths.

The player takes the part of Kate Walker, an employee of a law firm who travels to Europe to close a deal on the acquisition of a toy factory. As she investigates, she finds out that the heir, Hans, has been gone for some time to find the once thought to be extinct Mammoth's. Unwillingly, she goes to find him to close the deal. During the time she tries to find him, she gives up wanting to continue with her job and peruses the Mammoth's with Hans.

Syberia draws heavily from steam punk fiction and features mechanical toys, automatons and a train using the steam punk technology. The steam punk aspect runs heavily through the story, being used on various objects. Syberia is also set in the same fictional universe as Amerzone, another game designed by Sokal. Several references to Amerzone can also be found throughout the game.

The gameplay in Syberia is similar to that of any point-and-click adventure, with the player able to control Kate and move her around environments searching and exploring for items, clues and information that will allow the player to progress through the locations and storyline. The vast majority of Syberia relies on information gathering (i.e. talking to the games many NPC's), finding items that can then be used to interact with other items or in-game objects (example: Putting voice cylinders into a music box to play back the recordings) and solving puzzles. As such, the gameplay has the same issues as most adventure games in that, at times, if the player is unsure of what they are supposed to be doing they can find themselves running around fairly large environments inspecting anything and everything in the hopes of triggering an event.

A large portion of the game revolves around the Train that Kate boards fairly early on. This train wil make several stops on its journey, each stop bringing Kate to a new location and requiring the player to overcome new obstacles and complete tasks for the right people in order to get the train running again and move on to the next area. At each stop, Kate normally must speak to the local residents to learn more about the area and help to overcome some of the problems of the characters, which will usually provide some kind of reward, be it a physical item that Kate needs to solve another puzzle, or information regarding some of the major characters in the plot.

As Kate Walker you are taken on a journey through many exotic locales. Beginning in a remote town in France you are then transported through Cental and Eastern Europe.

Syberia begins in the fictional French town of Valadilène. Here is where the Voralberg toy factory is located where the famous Voralberg Automatons were manufactured.

Barrockstadt is the first stop on Kate's adventure and is home to a failing university. At the entrance of the university is an automaton bandstand with violin playing automatons. Here Kate learns a little bit of background information on the Youkols and how they began to

domesticate mammoths. The train stop here is also home to a large aviary.

Aralbad is home to a cozy spa as well as a drying up lake.

The reviews of the game were positive, having praise towards the games art direction and script for their unique qualities and understated intelligence. While critics like the game, there were a few complaints, including poor translation and having to walk through an area multiple times without anyway of quickly going through it 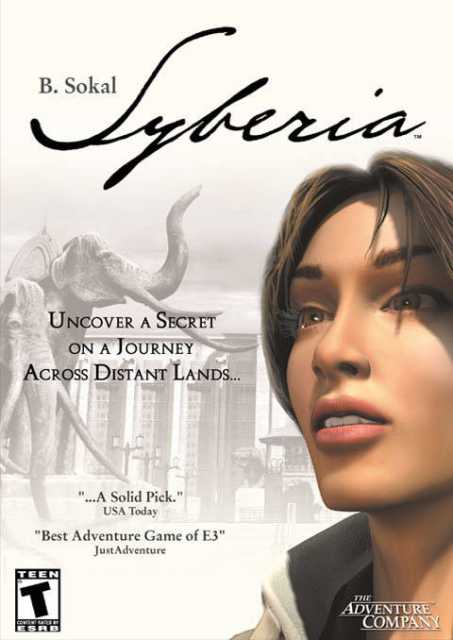