A tile-matching puzzle game with characters from the Mario series. Shift around a group of delicious cookies in order to make matches and clear them out.

Yoshi's Cookie (known in Japan as Yoshi no Cookie) is a tile-matching puzzle game developed by Tose and published by Nintendo (under license from Bullet-Proof Software) for the Nintendo Entertainment System and Game Boy on November 21, 1992 in Japan, on April 10, 1993 in North America, and on April 28, 1994 in Europe.

In Yoshi's Cookie, players are given a rectangular group of cookie tiles and must arrange them so that an entire row or column has the same cookie type (which removes them from the playfield). Players can only arrange the group of cookies by shifting entire rows or columns (which wrap around eachother) and the game uses a corner-based "gravity" (with tiles "falling" both top-to-bottom and right-to-left).

Similar to Dr. Mario and Yoshi, the game features characters and settings from Nintendo's Mario series, including mascots Mario and Yoshi (with later versions also including Princess Toadstool and Bowser). Along with a round-based single-player mode, the game includes a unique VS Mode with a special 5x5 playfield and power-ups. The GB version features support for the Four Player Adapter, allowing for four-player multiplayer.

It later received a port for the Super Nintendo Entertainment System in 1993. Developed and published by Bullet-Proof Software, the SNES version features two additional modes: a single-player VS Mode (where players play against a CPU opponent) and a Puzzle Mode (where players have a limited amount of moves to clear a static playfield). Its Puzzle Mode is notable for its puzzles designed by Tetris creator Alexey Pajitnov.

The SNES version of the game received both a rare tie-in re-release (Yoshi no Cookie: Kuruppon Oven de Cookie) and an enhanced port for the GameCube (as part of the Japanese-exclusive Nintendo Puzzle Collection). The NES version was later digitally re-released as a Virtual Console title for the Wii in 2008 (April in North America and Europe, June in Japan).

The game is made up of a square grid, broken up into 25 to 49 sections (5 x 5 or 7 x 7) depending on the version. Cookies of various decorations fill in the entire grid. The player manipulates entire rows either horizontally or vertically to try to match cookies that are alike. Once a row is filled with cookies of the same design, their point count increases by one and the row is wiped off of the screen.

In VS Mode, both players are given a 5x5 board that automatically re-fills after a combo ends and cannot "over-fill". The objective is to win rounds by either accumulating 25 points (with each row/column clear worth a point) or having their opponent failing to make a match on a time limit.

The game's power-up system is unique in that both its effects and the player receiving these effects change over time, with the possibility that players can penalize themselves if not careful. The player's current power-up is activated once they make a match of Yoshi cookies.

In the SNES version, players choose between four characters, each with their own unique stats (mostly affecting how long each power-up effect against them lasts):

The SNES version of the game received a rare re-release in Japan known as Yoshi no Cookie: Kuruppon Oven de Cookie. Released by Panasonic (under its National brand), this version is a tie-in with their line of microwave ovens.

Along with the regular game, it includes a bonus "Cooking" mode where players, as Yoshi, learn how to bake cookies in real life (including recipes and advice). This mode is presented with a RPG-style world map and includes two mini-games: one where players guide Yoshi around a kitchen to find ingredients and cookware and one where players prepare cookies. 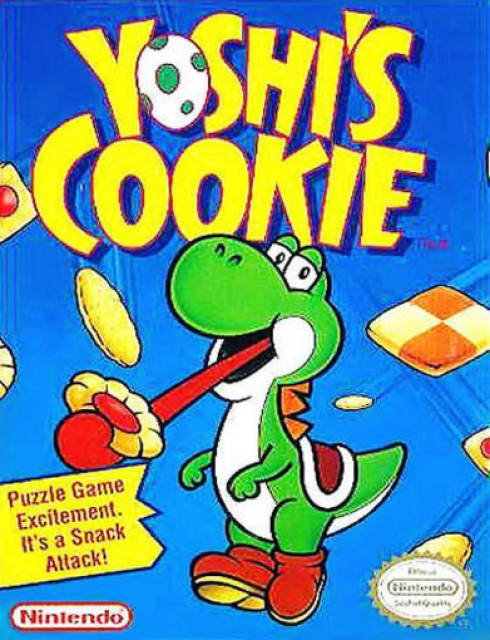