Originally a Flash-based game found on the Newgrounds Flash portal, Alien Hominid is a side-scrolling shooter most notable for its uniquely referential 2D visual style, playful sense of humor, and an insanely unforgiving level of challenge. The game tells the tale of a yellow, bug-like alien who crash-lands on Earth, only to have its spaceship confiscated by the FBI, which it then spends the rest of the game trying to recover. In addition to taking on the FBI, Alien Hominid pits you against KGB agents, the soldiers at Area 51, as well as a menagerie of giant robots and screen-filling boss monsters.

The artist from the game is Dan 'Synj' Paladin, the same artist who worked on the original Flash game, giving it a distinctive look. Additionally, the game is extremely bloody for a T-rated game, but it's also very cheeky and has a toggle for the gore. If left on, then heads are chomped, people are split in half, rib cages are exposed, and blood splashes everywhere. Off, it replaces the blood with "glitter and flowers", so a decapitated body has a flower growing over the gaping wound and enemies release pretty flowers and sparkles as they die gruesome deaths.

The actual gameplay of Alien Hominid is akin to the Metal Slug series of games in almost every possible way. The hominid has a laser pistol with infinite ammo, which can be charged up to release even more devastating attacks, a finite amount of grenades, friendly NPCs that drop weapons (in this case, Fat Kids) and seemingly endless waves of enemies to mow down to your heart's content. Separating the hominid from a mere human, however, are a few slight abilities that aid in the defeat of enemies. First, the enemy ride, allows you to do just that-ride the back of an enemy. From here, the enemy will be blinded and run around, flailing its arms, and is otherwise helpless. Other enemies can shoot your mount, who will take the damage, or you can flip the enemy over and throw it at the other enemies, or simply bite its head off (which startles the other enemies for a second). The hominid also has the ability to burrow, which dodges attacks and lets him pull enemies into the ground with him (and find hidden lives). However, if you stay underground too long, the alien will suffocate (and no one wants that). Up close, the basic attack automatically becomes a knife slash..

At the end of each level, a points tally is added up for enemies killed, boss bonus and a style bonus, which is received from doing the actions listed above and mixing up the play style. As it tallies up, lives are being added to your coffer, allowing a very skilled player to theoretically never have to worry about a game over. In practice, the game's extreme difficulty renders this mostly a pipe dream, and the player is left literally fighting for their survival against a brutal one-hit kill system. In co-op, after the points are tallied, a "winner" is then declared, though this does nothing to the gameplay but allow gloating privileges.

The levels have a slight verticality to them, with a few platforms that can be jumped between to allow the player to bypass certain sections or enemies, but overall it's a very linear game. Though they don't really make a large difference, there are 3 main worlds, divided into about 21 sublevels for about 2 hours of gameplay if you don't get a game over (which is unlikely on your first try, to put it mildly). Within the levels are extra areas with breaks from the sidescrolling action to allow the player new activities, keeping the game from going stale.

A few collectibles are found in the game, mostly in the form of hats to personalize your alien. To unlock them, certain conditions must be met, such as destroying a certain building or stealing the car from the clown on the freeway level. These don't really add anything, but make the already adorable hominid not just a cold hearted killer, but a cold hearted killer with a wicked fashion sense. Players are also able to change the name of their alien.

The Fat Kids drop a few different types of weapons throughout the game, each being its own different power, but having a set amount of ammo before running out. In addition, each power-up changes the type of grenade you carry (though this mostly just powers it up) and gives a one-hit shield, keeping death back just the tiniest bit.

Separate from the main side-scroller game, Alien Hominid includes a number of minigames, such as the Atari-2600-inspired "Soviet Missile Master", in which the player must guide a Russian missile to the USA, as well as the "PDA Games," a monochromatic platformer with pronounced puzzle elements that consists of hundreds of single-screen levels. Alien Hominid has been released for the Nintendo Gamecube, Playstation 2, Gizmondo, Game Boy Advance and Xbox. Most recently, the game was released for Xbox Live Arcade as Alien Hominid HD. The latest installment includes an online multiplayer button masher called "All You Can Eat". 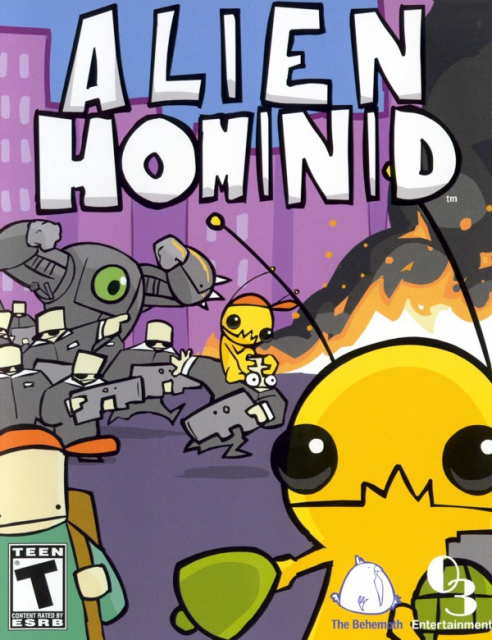