The second of Data East's Ancient Greek-themed JRPGs, otherwise known as The Glory of Heracles, and the last to be released on the Famicom (NES).

Though largely a traditional turn-based JRPG in the vein of a Dragon Quest, the game has a few uncommon features. Item durability, for instance, is a constant problem unless the player hires the blacksmith god Hephaestus to join them as an assistant NPC. Otherwise, they need to return to him to fix equipment. Heracles can use any weapon though certain weapons are more effective against certain enemy types, for instance spears against sea-based creatures. There's also a day/night cycle that determines the opening hours of specific establishments.

Though never officially localized into English, it did eventually receive a fan translation in 2005. 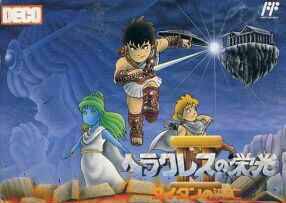