Impossible Creatures is a real-time strategy game from Relic that is based on fighting genetically modified animals created by the player, allowing for bizarre combinations such as an ant and a wolf, or killer whale and snowy owl.

Impossible Creatures is a Microsoft Game Studios and Relic Entertainment  real-time strategy game which allows the player to combine and fight different types of animals in a single-player campaign (where the player must "collect" DNA samples from each creature) or through a multiplayer mode, where the player can play against the computer or other players with his mutated creations. The game, released in 2003 with later game add-ons, boasted 76 different varieties of animals to mix-match, allowing for at total of 127,392 combinations of unique creatures.

The story takes place in 1937, the year after the devastating depression, the world is in chaos and so the world turns to Dr. Erik Chanikov.  Dr. Chanikov has spent the last thirty years on a small chain of islands in the South Pacific, developing a secretive technology known as Sigma.  The end goal of Sigma is to eradicate inherent genetic flaws that cause illnesses, deterioration, and weaknesses (e.g. aging, diseases, etc.).  He has been using Sigma Technology on animals and has discovered that he can combine any two animals, creating vastly strange creatures that retain the dominant strengths of both animals and yet inherit neither of the two animals weaknesses.

Unfortunately there are those who would wish to use this technology for evil.  A wealthy American industrial philanthropist and friend of Dr. Chanikov, Upton Julius, is the sole financial and emotional supporter of Dr. Chanikov and Sigma Technology.  Seeing what Sigma is capable of, Upton no longer looks to better humanity, but has become slightly disturbed and power hungry.

Upton has secretly been collecting henchmen and minions alike to take over the world; Whitey Hooten, the brutish whaler, Velika La Pette, the sinister ornithologist, and Dr. Otis Ganglion, the deranged veterinarian.  Because of Dr. Chanikov's obsession with his work, he did not see his friend's agenda change.

Although Dr. Chanikov is blind to Upton's agenda, Dr. Chanikov's assistant, Dr. Lucy Willing, suspects Upton is up to something.  Not attaining the proof she needs, she secretly builds a mobile laboratory capable of providing adequate measures for them to preform their experiments.  If worst comes to worst, both Dr. Willing and Dr. Chanikov will have a safe place to hide.  In the mean time she patiently waits for Upton to slip up.

The player takes control of Rex Chance, a freelancer war correspondent / adventurer who is "down on his luck".  He gets a call and finds himself in the middle of a brewing war between good and evil.

RTS at it's core, gathering and base building.  Whether its collecting coal or energy to build and create various buildings, creatures, and henchmen, stockpiling to build an armada seems to be the right decision.  Fights take place against either the computer or other players via the internet. In the single-player campaign, the player takes control of Rex Chance, fighting through 15 different levels.

A list of animals available to combine in the game.

The game has two expansion packs are available for free on Microsoft's webpage, combined they add about 25 new animals for use in-game.


The following hardware is optional, but recommended for multiplayer gameplay: 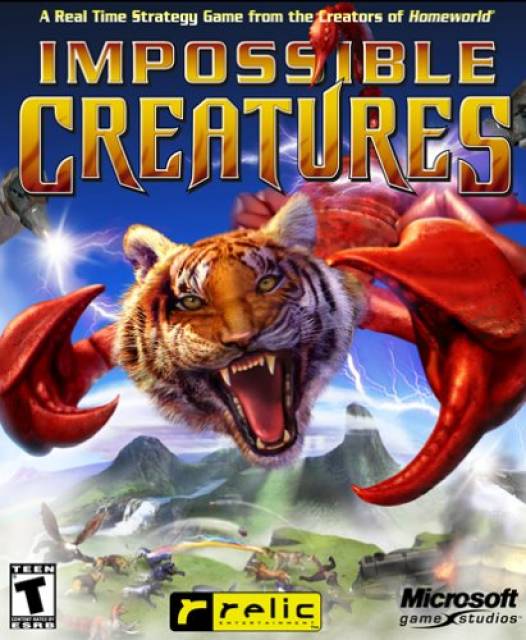