In this text adventure, written by Scott Adams, the player awakes in a sealed wing of the Count's Transylvanian castle and must approach his goal of overcoming the Count to not end up as his next victim.

In this text based adventure game the player is enlisted by Transylvanian villagers to defeat Count Dracula. Along the way through the game the player must find and use items from around the castle of the vampire lord. Players move from area to area, finding objects and then using them somewhere else to solve puzzles. These items are integral to defeating Dracula. Items and actions in The Count were similar to those in Adventureland, Pirate Adventure and Secret Mission, the games that came before The Count. Players had to type text to move through the game; text such as Climb Tree or Walk East.

Unlike earlier Scott Adams adventure games, The Count uses time during the game. The game is set over three days and particular situations must be solved on particular days. In fact, specific events happen at specific times on certain days. The player during the game had to avoid being attacked on the first two nights to finish the game. Ultimately and as a result, the typical player would need to replay the game several times to find the correct order of events in order to finish the game. 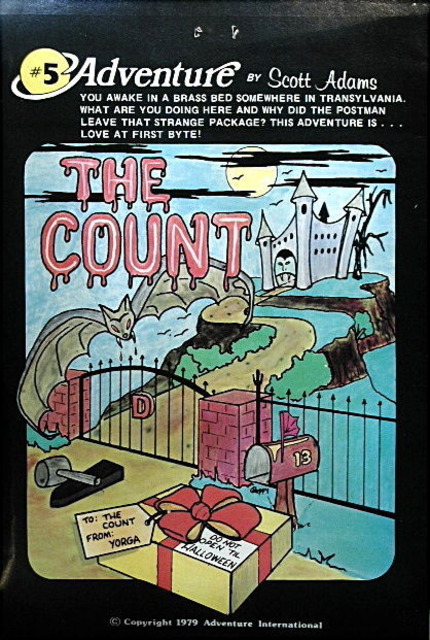