SSX Blur brings the venerable snowboarding franchise to the Nintendo Wii. Blur features extensive motion based controls that allow a player to guide her rider using the Wiimote's motion controls for big moves, and the nunchuks analog stick for fine movements. Blur features multiplayer support for up to four players.

The gameplay in SSX Blur follows a similar format of the previous SSX titles. Like SSX 3, the player progressively works up through 3 peaks on a mountain, participating in races, trick competitions, and the new slalom event to earn prizes and other unlockable material. Players are able to choose from either the traditional snowboards; or skis, as introduced in SSX On Tour.  The game control uses both the Wiimote and the Nunchuk controller. Movement, speed, and jumping are controlled through the Nunchuk, while, when in the air, the Wiimote is used to perform tricks. The Wiimote is also used for throwing snowballs at targets or foes during a race. As the player races down the hillside, they can successfully complete tricks to earn points as well as to build up an ever-depleting boost meter. When the boost meter is full, the player is then able to execute special "Ubertricks", which require the player to draw a specific shape in the air, such as a heart or a treble clef. While the player knows some Ubertricks at the start of the game, additional ones can be discovered in career mode by collecting icons for that Ubertrick hidden across the various courses.

In SSX Blur, there are numerous events you must compete in order to advance in the career mode. These inlcude:

The goal of races is to simply come in first place. To do so, its all about finding the fastest line down the course. Pulling off tricks while racing will give the player the advantage of increased adrenaline for a speed boost. Also, watch out for other rides; they try and hunt you down if you managed to knock them down earlier in the race.

Slopestyle is a freestyle event in which you try and find the best line given your skills and style of riding. At the end of the run, you'll be judged on the tricks and manoeuvres you pulled off, and then a winner is declared by whoever gained the most points. There is no one proper line down a slopestyle course, just the one you like the best.

Try to gain as many points as possible in a given time limit in a half pipe course. Simply complete as many tricks and stunts as you can, while trying to achieve maximum height. However, make sure you cross the finish line before the clock expires otherwise your points do not count.

In the Big Air event, its all about catching as much air as you can, pumping up your score and doing as many ubertricks as you can muster.

The slalom event is about carving, not speed. Your goal is to weave in and out of many flags spread through the course as fast as you can. Just remember to go to the left of blue flags, and right of red flags. Also, you gain extra time when missing a flag, so make sure you don't pass any.

Come on and take a freeride! Just explore the tracks and mountains in this more relaxed mode without any specific goal. You'll be able to find ubercollectibles and other goodies, and compete against another SSX Blur character in a 1 vs. 1 challenge.

There are 32 challenges scattered over the mountain, and you'll be able to find them while freeriding. Winning these events will reward you with your rival's boards and skis, unlockable gear that improves your character's stats. 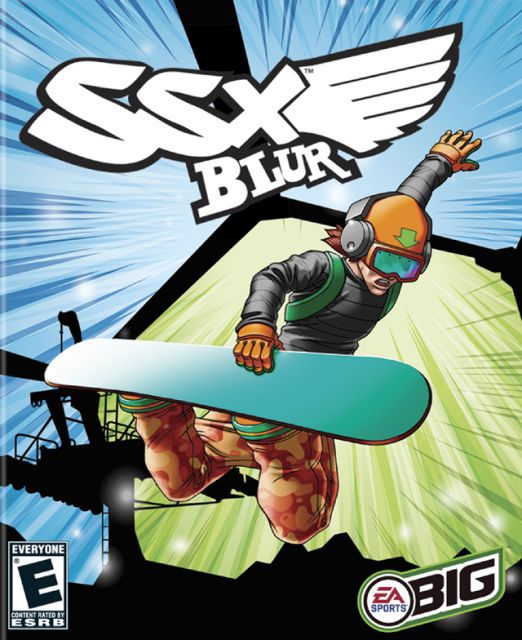