Xenogears is an RPG spanning several millennia, weaving religion and philosophy with science fiction and turn based gameplay.

Xenogears is a console role-playing game released by Squaresoft in 1998 for the PlayStation. The game features a millennia spanning science fiction storyline and multiple battle systems, and is the basis for the tangentially related Xenosaga series. Upon its release, it was met with positive acclaim from critics, garnering an 84% average rating on reviews aggregate Metacritic and a 91% on Game Rankings.

The game was developed by a team including director Tetsuya Takahashi (who later joined a team at Monolith Soft, developer of both Xenosaga and Xenoblade Chronicles) and famed composer Yasunori Mitsuda (known for his work on the Chrono series). The game is considered to primarily represent 'Episode V' of the story of the game's world. Due to not reaching one million sales within a year, the game was not green-lit for any sequels.

Xenogears is known for its storyline, which is heavily influenced by philosophy (such as the ideas of Friedrich Nietzsche, Sigmund Freud, and Carl Jung), religion and Biblical allusions, and science fiction concepts (most notably nanomachines and the relationship between man and machine).

The game begins with Fei, gregarious martial artist and painter, preparing for a big wedding. But a civil war finds its way to his home, and while attempting to fight off the invaders, his enigmatic past catches up with him. The people of his own village banish him, and he sets out on a complex and gripping quest.

While at first the game seems to be following traditional rpg territory, i.e. strange man in a rural village with memory loss sets off on an adventure, the game explores much darker themes and gets very complex toward the end. The game pretty much touches on everything: love, hate, loyalty, racism, religion, the nature of humanity, etc. The game is set in the world of Ignas where 2 great nations are at war: Aveh and Kislev. The game begins with Fei living in the and the whole village looking forward to the wedding of the year. But their normal lives are destroyed when their village gets caught in the crossfire of a gear battle between Aveh and Kislev. During the battle Fei becomes trapped and his only means of survival is to enter the cockpit of a crashed gear, but when he does, something stirs within him and he automatically knows how to control the gear. Using the gear he clears the invaders from the village, but the villagers turn their anger on Fei as he fought back and they blame him and chase him out of the village. The only thing Fei can do now is to try and find out how he knows how to pilot a gear and why this particular gear feels so familiar.

Xenogear's story spans across 15 000 years, beginning in 2001 with the discovery of the "Zohar", an artificial 3.9 billion years old eye-shaped object. First believed to be the source of all life on earth, it was eventually forgotten and lost for nearly 5000 years before being rediscovered. It was soon found to be able to produce an infinite amount of energy by manipulating the fabric of reality. At the time a cosmic conflict was turning into a full scale war, and the Zohar was used as the power source for Deus. A bio-mechanical planetary invasion weapon capable of single handedly suppressing and destroying an enemy planet and repairing itself using biological material found on the battleground. However, during the connection between Deus and Zohar, a bodiless "wave-being" from a higher plane of existence was pulled into the three dimensional plane and was trapped inside Deus. Once completed, Deus was used once, but was found to be too effective. It utterly destroyed all life on the planet it was deployed to and it's efficiency scared its creators so much it was decided Deus was to be destroyed by being thrown into a black hole. It was split into separate parts and transported on a city-sized spaceship called the Eldridge. However during the trip, Deus managed to hack into the Eldridge's computer system and changed the destination to the “main planet”. In the ensuing chaos the Eldridge crash landed on an unknown planet leaving Deus scattered and only one survivor: A seven year old boy, Abel, who stumbled across the Zohar while looking for his mother. Able came in contact with the Wave Existence and through it's protection landed safely. He gained several powers from the Wave Existence, including the power of reincarnation. The Wave Existence also created a woman for him in the image of his mother called Elhaym (Elly). Deus, unable to function in it's current state, activated it's self repair system, and seeded the planet with human beings to be used as spare parts. Only the best specimens could be used, and so the planet was “reset” several times through induced war, pushing human evolution forward.

10 000 years later the self restoration system is nearing conclusion, and the game begins with the current reincarnations of Abel and Elhaym: Fei and Elly.

The game features random encounters where the player is thrown into battle randomly when walking around the world map and within certain areas. The combat is an interesting blend of real-time and turn-based action. Each character has an action bar that fills up depending on that character's speed. Once that character's action bar is full the battle pauses and it becomes their turn. This is not quite real time because the player is given unlimited time to plan out their move when a character is active.

Each character has three attack buttons signifying weak, medium, and fierce. Each attack takes a certain number of AP, and each character has 7 AP to use for attacks. By putting in special combinations (such as weak, weak, fierce) that character may execute a special technique called a deathblow. Each character has their own set of deathblow combinations that can be learned by inputting their commands. This makes the game a little tough without a list of known abilities because a player cannot use an ability unless they've input the command for that ability several times already. Also, certain deathblows can only be learned when a character reaches a particular level.

The game features a mechanic where a character can attack one or more times then press the cancel button to stop attacking in the middle of a combo. This allows that player to save any ability points not spent to use on their next turn. For example, if it is Fei's turn and he executes a weak attack then cancels the combo, he will have 6 AP left over. At the start of Fei's next turn he will have 13 AP rather than 7. A character can store a maximum of 28 AP. By having additional AP, characters can enter a mode called "combo" where they chain together the deathblows that they have learned to do stronger damage than individual deathblows would have allowed. Each deathblow performed during the combo will subtract its cost from the pool of AP available.

In addition to the hand to hand combat, the game also features battles utilizing big giant fighting robots called Gears. During some of the random encounters, you can elect to jump into your gear at any point and stomp on your enemies, but mostly Gears are used in specific gear-centric environments where you fight mechanical monsters. The battle mechanics are slightly different but like the hand to hand combat it is based around combos and building up to a deathblow type attack. Instead of AP you have Fuel and attack level; each attack is broken into light, medium and strong and each one uses units of fuel , with light being the lowest. Every time you attack the enemy the attack level of the gear increases to the point where you can unleash a deathblow-like, combo special attack. There are 4 levels of special attacks 1,2,3 and infinity. If you reach infinity level your gear enters hyper mode which lasts for 3 turns and you can use super-powered special attacks and recharge fuel at a much faster rate. Hyper mode cannot be accessed until late in the game, as to access it, you need to have learned all deathblows for your gear. Gear combat has a few other options, there is a charge option which makes the gear recharge some fuel, there is a boost option which increases the frequency of your gears turns but it consumes fuel more quickly. You can also recharge your gears HP using the special option and finally you still have access to ether attacks in your gear.

The game's soundtrack was composed by Yasunori Mitsuda and was released in Japan on a two CD set. An additional fully orchestrated album was later released named Creid.

The style is diverse but was inspired by Irish music and has a distinct feel.

The games soundtrack featured two vocal tracks, only one of which was used in the game. The song Star of Tears, was supposed to be played in a scene early in the game but was removed for pacing reasons. The song "Small Two of Pieces" was played during the game's end credits. Xenogears was the first Squaresoft game to feature an end credits song. Both songs were composed by Yasunori Mitsuda and performed in English by Irish singer Joanne Hogg. In Creid, both songs were rerecorded in Japanese with Tetsuko Honma as "Two Wings" and "Möbius".

The religious content involved in Xenogear's story almost prevented the game from going to America. The game was never released in PAL markets.

The game's story, characters, and objects, have a great deal of symbolism, religious concepts, philosophical concepts, psychoanalytic theory, and science involved with them. One can argue that Xenogears is a reasonable game to write a thesis paper on.

The second disc of Xenogears has a reputation of being not as fine tuned as the first. Most believe this is due to a rush on development.

Xenogears was originally meant to be a series of six games, of which this game was the fifth. "Episode V" is shown during the end credits.

Xenogears was actually hinted at in Final Fantasy 7 over a year before its release. During disc 2, Cloud is incapacitated and is being taken care of at a small hospital in Mideel. When prompted he just spouts seemingly feverish nonsense, including the line "A billion mirror fragments... small... light... taken... angel's... singing... voices... zeno... gias...". The astute reader will notice that 'zenogias' is the Japanese name for Xenogears!

After the game was released, the people who created it split from Squaresoft and created their own studio, Monolith Soft. Because the rights to Xenogears were held by Squaresoft, they couldn't make any prequels or sequels, and as a result they decided to start "from scratch" and created the spiritual successor Xenosaga. 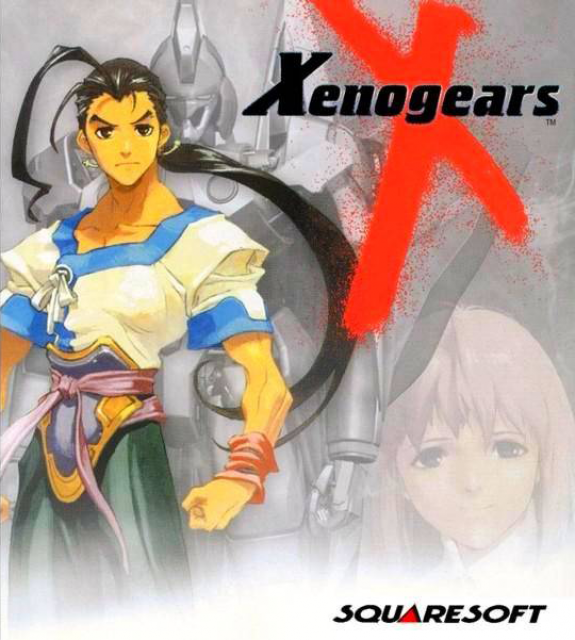