Blacksite: Area 51 ('BlackSite' in Europe) is a Sci-fi inspired First Person Shooter where players assume the role of Delta Force soldier fighting to contain both an alien menace and a government experiment gone horribly wrong.

A demo was released of the game on Xbox Live on May 11 2007, and is set near the beginning of the game in Rachel, Nevada. A second demo was available on Marketplace a week after the game came out. The game received mixed reviews and criticism from many outlets. Game designer Harvey Smith publicly stated that the game's schedule was responsible for its negative reviews, and he left Midway shortly after making these comments.

The story opens in Iraq with Delta Force Echo Squad sent to investigate a bunker where WMD's are supposed to be stored. Once the squad get further into the area, they realize something is very wrong, and are attacked by what appear to be mutated human soldiers. Underground, Echo Squad discover some sort of alien structure, and when Logan Somers touches it, they are attacked by hordes of alien creatures. While escaping, Dr. Weis seals Somers inside the facility and the squad leave him for dead.

Three years later, Pierce is in Nevada to help the army get back a military base which has been taken over. Echo Squad is chosen because the aliens witnessed in Iraq have been spotted around the base. While trying to infiltrate the base, they are attacked by both the aliens (Xenos) and the Reborn, heavily mutated human soldiers who have U.S. dog tags. Upon reaching Rachel, the closest town to the base, the squad are surprised to meet Logan Somers, who they thought was dead. He claims that the US government has been "experimenting" on soldiers who were thought dead or had no close family.

Upon returning to the military base, Somers shoots Grayson and reveals he is the leader of the Reborn insurrection, and he accuses Dr. Weis of being responsible for working on the Reborn program. It is revealed that the Reborn program was scrapped when subjects proved too difficult to control. As a result, the government sealed up Area 51 and left the subjects to die. Somers wants to use the alien artifact that Echo Squad first witnessed to overthrow the government.

Echo Squad help with the military's huge preemptive strike on Area 51 to stop Somers and the Reborn. Pierce is captured and taken to Somers, who reveals that he has activated the artifact and released Xeno-spores into the atmosphere spreading the Xenos across the country. Weis arrives and frees Pierce, who kills Somers in a shootout. Afterwards, both Wies and Pierce escape in a helicopter as Area 51 collapses, and plan to investigate how far the spores have spread.

BlackSite: Area 51 features both ranked and player matches with the following mulitplayer modes:

Deathmatch
Standard "every man for himself" with up to 10 players. The player with the most kills wins the match.

Team Deathmatch
Deathmatch rules with teams of up to 5 versus 5 players.

Capture the Flag
Score points by retrieving the other team's flag and returning it to your base, as long as your own flag is safely there.

Abduction
One player randomly starts as a Reborn. Whenever a Reborn player kills a human, the human becomes a Reborn. Kills are worth 2 points. When a human player is killed, all surviving humans receive 1 bonus point. The last human player receives 3 bonus points. After all humans are abducted, the cycle starts again until the match ends. 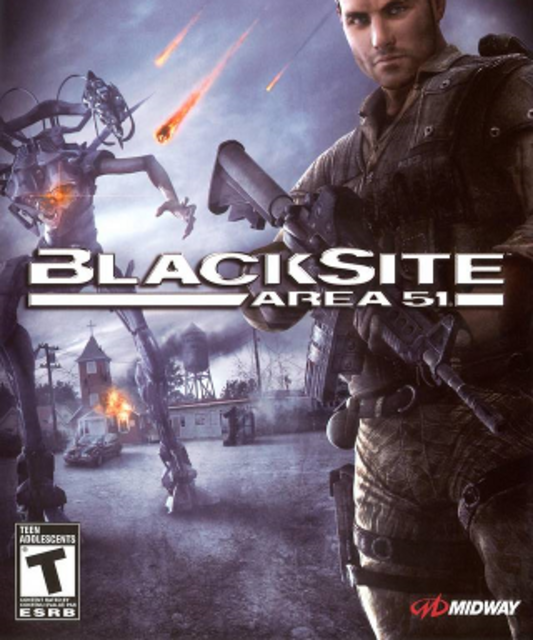