Frets on Fire is an open-source rhythm game developed by Unreal Voodoo, meant to replicate the gameplay of the popular Guitar Hero and Rock Band series.

Using either a computer keyboard or a USB controller (such as a PS2-to-USB adapter), players use one hand to hold the frets and the other hand to pick.

The game features the ability to rip the official songs from Guitar Hero, Guitar Hero II, and Guitar Hero Encore: Rocks the 80s, provided that players have the game disc available. Three songs are included with the game, and the game also allows for user-generated tracks (either created with the built-in editor or other freeware editors). Several forum communities exist to share such tracks.

Numerous mods exist that change the gameplay (including adding 'Star Power' and refined hammer-on & pull-off functionality) or change the aesthetic to emulate that of the the Guitar Hero or Rock Band series. 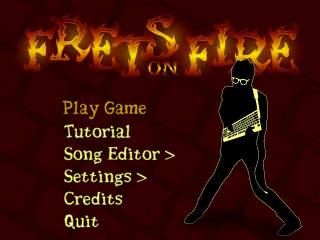