The sequel to the 1997 game Densha de Go!, Densha de Go! 2 features an updated user interface and a new set of real-life train routes (the Hokuhoku Line, the Akita Shinkansen, and an alternate version of the Keihin-Tōhoku Line) with different difficulty levels and sub-routes.

The game later received an update on September 1998, known as Densha de Go! 2 Kousoku-hen: 3000-bandai (loosely translated to "Go by Train! 2: High-Speed Edition, 3000 Series"). This version extends the number of courses (most of which are alternate versions of the included routes with different vehicles) while adding parts of the Yamanote Line and Tōkaidō Main Line (both of which differ from the parts from the original game).

Both versions of the game received console ports, and the 3000 Series version was later included in an update to the 2017 arcade game Densha de Go!! (as a bonus game mode, known as "Fukkoku-ban"). The game was also used as the base for the console spin-offs Densha de Go! Professional Shiyou, Densha de Go! Nagoya Tetsudou-hen, and Kisha de Go!.

Unlike the previous game, each route in Densha de Go! 2 has multiple sub-routes with different difficulty levels, each changing the trains used and/or changing the route itself:

In the 3000 Series version, routes are split into four groups:

Begins at the northern tip of the Shinetsu Main Line (at Naoetsu) and runs eastward through the whole Hokuhoku Line, ending at Muikamachi.

Not included in the "Fukkoku-ban" version.

The original version of the game has a small eastward part of the Akita Shinkansen, from Akita to Ōmagari. The 3000 Series version includes an extended version that runs through the entire route, ending at Morioka.

In both Special Class routes, exceptional performance can lead to a bonus round in the Tōhoku Shinkansen where players drive a Series 200 from Morioka to Shin-Hanamaki. This bonus route can be played on its own in the N64 version (as a hidden unlockable) with three trains: Series 200, Series E3, and Series E2.

The game includes the part of the Ōu Main Line that shares the same track as the Akita Shinkansen, from Akita to Ōmagari.

The game includes the part of the Tazawako Line that shares the same track as the Akita Shinkansen, from Tazawako to Morioka.

The game includes a part of the Keihin–Tōhoku Line that spans northward through most of the Tokyo region, from Shinagawa to Ueno. Later versions expand this route, starting at Yokohama.

The game includes the southern half of the Yamanote Line, running clockwise from Tokyo to Shinjuku. This route appears in the first game, albeit in the opposite direction.

This game includes the "JR Kobe Line" part of the Tōkaidō Main Line from Osaka to Kobe. While the railway appears in the first game, that version runs the "JR Kyoto Line" part.

This version includes the western half of the Osaka Loop Line, running counter-clockwise from Osaka to Tennoji.

This version includes part of the Kagoshima Main Line northward from Hakata to Kokura. 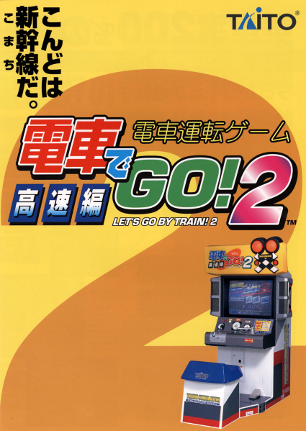