A murder mystery text adventure set in the 1930s.

The Witness was the seventh game released by interactive fiction pioneers Infocom.

The game designer/programmer (or as Infocom called it, "implementor", or "imp") for Deadline was Stu Galley. Galley was a co-founder of the company, but prior to The Witness, was not involved in game programming. Among other duties, he served as company treasurer, and wrote the user manual for Zork. However, the Deadline project inspired Galley to write and program his own mystery game. Deadline's "imp" Marc Blank had already provided the game's central concept: Rather than being called in after the fact as in Deadline, the player would witness the crime themselves.

The project was originally titled "Invitation to Murder". As with Deadline, Infocom's advertising gurus at Giardini/Russell suggested the final title.

Set in the Los Angeles, California area in February of 1938 (a setting suggested by both Giardini/Russell and "imp" Michael Berlyn), The Witness is influenced by the works of Dashiell Hammett and Raymond Chandler. The game sets its scene via a great deal of period-appropriate slang, as well as the "feelies" (see below).

The Witness sold approximately 60,000 copies within its first two years of release.

Galley would later co-write Seastalker and Moonmist with Jim Lawrence.

The player character is a detective who has been summoned to the Cabeza Plana, California office of Mr. Linder, a millionaire. ("Cabeza Plana" means "Flathead" in Spanish, a reference to Zork lore.) Linder fears that his life is in danger... and indeed, as he sits in his office with the player, he is murdered before the player's eyes. The player then must solve the murder.

The player collects evidence by finding clues and interrogating suspects. Sergeant Duffy (reappearing from Deadline, even though The Witness is set about 50 years earlier...) can be ordered to bring objects to the police lab for fingerprinting or analysis. The object will then be unavailable until Duffy returns with the lab results.

At any time, the player can order the arrest of a suspect or suspects, which will end the game. Additionally, the game's clock progresses as commands are entered. If 12 in-game hours have passed without an arrest, the game comes to a negative ending.

The Witness requires less evidence to be accumulated for a positive ending than Deadline does. It also features fewer locations and suspects. It has random events, but unlike Deadline, there are no timed events that require the player to be in an exact location at an exact time in order to witness them and proceed to the best possible ending. For all these reasons, it is generally a much shorter game to solve with a perfect score than Deadline was.

As had become traditional for Infocom, The Witness's packaging contained collectibles (or, as they were referred to, "feelies") to help set the mood of the game. The Witness's "feelies" may have succeeded in this goal more than those for any other Infocom game, demonstrating exceptional research and design sense. Real 1930s newspapers and advertisements were incorporated into them. The "feelies" were: 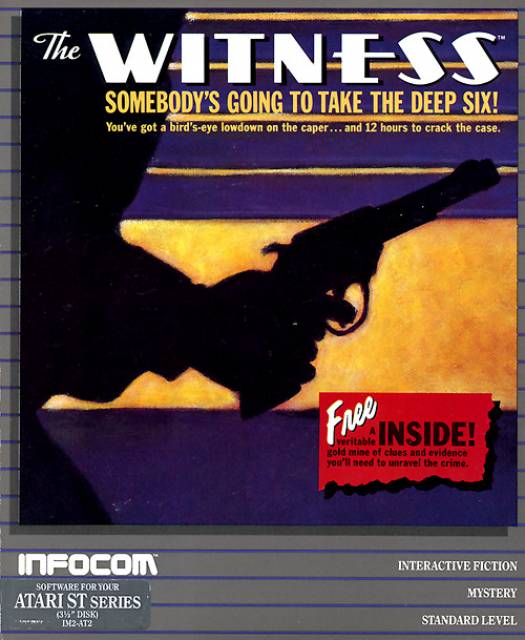