Hoshi wo Miru Hito is a sci-fi themed Japanese RPG released for the NES in 1987, noteworthy for its difficulty and poor construction. It was only released in Japan.

Originally intended as a remake of the 1984 Japanese cyberpunk PC role-playing game Psychic City, Hoshi wo Miru Hito ("Stargazer") is a Japanese sci-fi RPG where the protagonist is an Esper - a psychic - attempting to find their way off the planet and into space. It plays much like other Japanese console RPGs of the period, taking cues from Enix's Dragon Quest including its turn-based strategic battles.

It became something of a cult game due to the many odd idiosyncrasies with its design choices, most of which make the game considerably more difficult to play than it perhaps needed to be such as towns being invisible on the world map and party members being unable to trade items or cash between each other. It was never released outside of Japan but it eventually received a fan translation.

While the plot, about a supercomputer brainwashing citizens, was original and had potential, the game did very little to expand on it (since the game's manual is needed to understand it), while the poor and confusing graphics and flawed gameplay gave it a "kusoge" ("crap game") reputation in Japan. Nevertheless, a 2005 Japanese fan remake called Stargazer was created using RPG Maker XP, rectifying many of the issues and improving the game significantly. 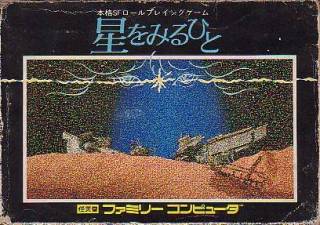