A falling-block tile-matching puzzle game with characters from the Mario series. As one of the Mario Brothers, swap trays of monster blocks to catch falling ones, and clear large stacks with Yoshi Eggs for bonus points!

Yoshi (known in Japan as Yoshi no Tamago, or "Yoshi's Egg", and in Europe as Mario & Yoshi) is a falling-block tile-matching puzzle game developed by Game Freak and published by Nintendo for the Nintendo Entertainment System and Game Boy on December 14, 1991 in Japan, on June and July 1992 in North America, and on December 1992 in Europe.

Similar like Nintendo's earlier puzzle game Dr. Mario, Yoshi has players attempting to clear the playfield by matching falling blocks together. However, instead of controlling the falling blocks themselves, players now swap adjacent columns that are stacked on top of trays (held by either Mario or Luigi, depending on the player). The game's namesake comes from special tiles resembling Yoshi Eggs, which can be used to sandwich tiles together to form a Yoshi that grants bonus points.

It is notable for being Nintendo's first collaboration with Game Freak, who later developed the mainline Pokémon series of role-playing games for Nintendo. They would also collaborate on Mario & Wario, Game Boy Camera, Drill Dozer, HarmoKnight, and Pocket Card Jockey.

In Yoshi, players are given a 4x8 playfield, with each of the four columns held up on a tray. Goombas, Piranha Plants, Boo Buddies, and Bloopers all fall from the sky, each of which can be removed (giving 5 points) by lining two of them up vertically. The game ends once a monster cannot enter the playfield on a full column.

Rather than controlling the falling monsters themselves, players instead guide Mario (or Luigi as the second player in a two-player game) between each tray (using the d-pad) and can press either A or B button to swap the two trays their holding (and the stacks they hold). They can also quicken the fall speed of the falling monsters by holding down on the d-pad. While players cannot normally change the column of falling monsters, they can "push" them to adjacent columns by swapping a column taller than its current position onto it.

In addition to the four standard tiles, the game includes two special tiles: the upper and lower halves of a Yoshi Egg. The lower half acts like a standard monster tile (and can be removed like the others), but the upper half instead performs the following when it lands on a stack:

Players are given bonus points depending on how many enemies are placed between the eggshells, which are shown with the Yoshi that hatches from it:

There two single-player modes and a multi-player mode. Players can customize both their starting level of difficulty (from 1-5) and two speed options (LOW and HIGH). 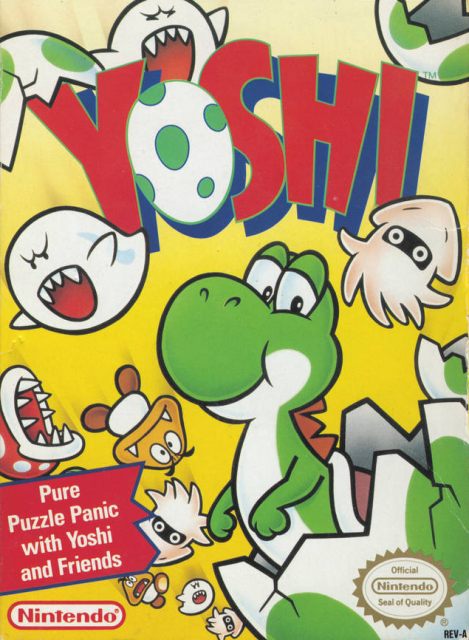