The third game in the RPG series known in the west as Glory of Heracles. It was originally released on the Super Famicom in 1992, and eventually added to the Wii's Virtual Console library fifteen years later in 2007. It is the most famous entry in the series.

Heracles no Eikou 3: Kamigami no Chinmoku ("Glory of Heracles 3: Silence of the Gods") is the third game in Data East's Heracles no Eikou / Glory of Heracles series of turn-based RPGs that are built around Ancient Greek mythology. Kamigami no Chinmoku is the first game in the series to be released on the Super Famicom (the previous two were Famicom games). It would also eventually be rereleased on the Wii's Virtual Console.

The game is best remembered for its plot, which was fairly unique for its time. Written by Kazushige Nojima (who would later go on to write Final Fantasy VII), the plot revolves around an amnesiac immortal (many years before Planescape: Torment or Lost Odyssey). Because of its plot, this is arguably the best known entry in the series, along with the more recent Glory of Heracles DS game, which is mainly based on this game.

Kamigami no Chinmoku's gameplay is retained from the previous Heracles no Eikou game: combat is entirely directed through turn-based, menu-driven commands, as was common for JRPGs of the era.

The story is focused around discovering the main character's identity, as he wakes up without his memory. He discovers early on that he is effectively immortal: he cannot be badly hurt, and he is able to use this unique ability to perform actions others cannot. The protagonist eventually meets various Greek gods and other famous mythological figures in his quest to discover who he is. 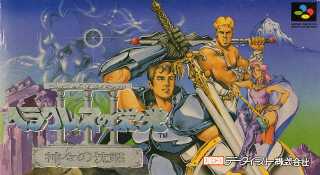