Despite the defeat of a powerful Maverick leader, Mega Man X (now the leader of the Maverick Hunters) keeps fighting new Mavericks (including the powerful "X-Hunters") while searching for the whereabouts of Zero in the second installment of the Mega Man X series.

Mega Man X2 (known in Japan as Rockman X2) is a side-scrolling action platformer developed and published by Capcom (published by Laguna for Europe) for the Super Nintendo Entertainment System on January 1995.

The second game in the Mega Man X series (and the sequel to the original Mega Man X), players reprise the role of highly-advanced android Mega Man X, who gains some of the major upgrades unlocked from the previous game (plus new upgrades, such as the ability to detect secret areas, perform a Dash in mid-air, store two charged beams at once for quick successive strikes, and perform a powerful screen-clearing attack).

Set six months after the events of the original Mega Man X (where X destroys Maverick leader Sigma and his forces, at the cost of the destruction of his mentor, Zero), X becomes the leader of the elite Reploid police force "Maverick Hunters". As the Maverick rebellion kicks back up, X must destroy a new group of Mavericks while hunting down the remains of Zero (taken by the "X-Hunters", a trio of powerful Mavericks consisting of Serges, Agile, and Violen).

Along with upgrades to the game's mechanics and graphics, the game includes an in-cartridge enhancement chip (Cx4) that allowed the game to use limited 3D wireframe graphics (including rotating and scaling effects). This technology would later be used in Mega Man X3.

Like the previous game, X can find rare large blue Light Capsules, scattered throughout the game, which show him a holographic message from his creator, Dr. Light. Depending on which Capsule X finds, Dr. Light briefs him on what the upgrade does before allowing him to step into the Capsule to receive it (giving him a shiny new replacement piece for his armor).

Along with the four Capsules above, the game includes a very hidden fifth Capsule which grants X a powerful ability (in similar vein to the secret ability in the previous game).

If he manages to reach a certain point in the third stage of the X-Hunter's fortress after receiving all four armor parts and obtaining every Sub Tank and Life Up powerups, and then following a specific path (covered in spikes), he can reach a Capsule in which Dr. Light grants X the power to perform a Shoryuken (made famous by Ryu and Ken of Capcom's Street Fighter series).

By inputting a specific combination (forward, then down, then down and forward, then the Attack button) while X is on the ground and has a full Life Energy gauge, X performs a powerful close-ranged rising uppercut that can deal serious damage to bosses. Earning this ability is not saved in the game's password system.

Based on the crab, Bubble Crab (known as Bubbly Crablos in the Japanese version) controls a subterranean base located under the deep sea. His weakness is the Spin Wheel.

Based on the snail, Crystal Snail (known as Crystar Mymine in the Japanese version) takes controls of a crystal mine. His weakness is the Magnet Mine.

Based on the stag-moose, Flame Stag (known as Flame Stagger in the Japanese version) controls a base within a volcano. His weakness is the Bubble Splash.

Based on the centipede, Magna Centipede (known as Magne Hyakulegger in the Japanese version) takes control of a central computer station. His weakness is the Silk Shot.

Eliminating him grants X the Magnet Mine.

Based on the moth, Morph Moth (known as Metamor Mothmeanos in the Japanese version) hides in a junkyard for robots. His weakness is the Speed Burner.

Based on the ostrich, Overdrive Ostrich (known as Sonic Ostreague in the Japanese version) controls a series of bases in the desert. His weakness is the Crystal Hunter.

Based on the alligator, Wheel Gator (known as Wheel Alligates in the Japanese version) commands a dinosaur-shaped tank (which, at the time, is wreaking havoc in a city). His weakness is the Strike Chain.

Based on a sponge animal, Wire Sponge (known as Wire Hetimarl in the Japanese version) controls the Weather Control Center (an structure allowing him to manipulate the weather inside it at any time). His weakness is the Sonic Slicer.

In 2005, Capcom released a 5-disc box set called Capcom Music Generation Rockman X1~6. It contains the original music of Mega Man X through Mega Man X6 as well as some unused tracks. Mega Man X2 tracks span the second half of disc 1 and the tracks are as followed: 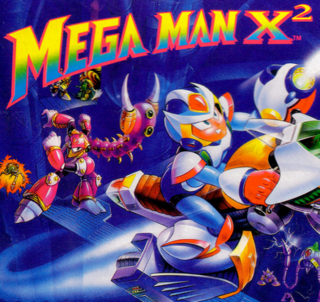