Return to Sengoku-era Japan and battle the demon forces of Nobunaga Oda as new warrior Jubei in this expanded sequel, which also adds a friendship system that can unlock extra story scenes and playable characters.
PlayStation 2

Onimusha 2: Samurai's Destiny is an action-adventure game developed by Capcom and exclusively released for PlayStation 2 in 2002. Set in feudal Japan, the plot follows a wandering swordsman named Jubei Yagyu who receives news of an attack on his home village. He returns home only to find the settlement wiped out by the demonic forces of resurrected warlord Nobunaga Oda. With assistance from the powerful Oni as well as some newfound human allies, Jubei swears to destroy Nobunaga once and for all and halt the demons' plans for conquest.

Like the original Onimusha: Warlords, the sequel shares many similarities with Capcom's elder survival-horror franchise Resident Evil, especially with regard to its "tank control" character movement and use of pre-rendered backgrounds. Onimusha 2 also adds a number of new features, such as four playable side characters managed by an intricate relationship system and a town area with opportunities for further NPC interaction.

Main protagonist Jubei's likeness is notably modeled after the late Japanese actor Yusaku Matsuda, who passed away over a decade prior to Onimusha 2's release.

In the Japanese Eiroku era, Year 3 (or 1560 C.E.), the warlord Nobunaga Oda defeated his rival Yoshimoto Imagawa in Okehazama. At the moment of victory, Nobunaga was felled by a random arrow shot by one of Imagawa's bowmen. However, his death did not mark the end of Nobunaga's ambitions. The evil he had wrought while on earth attracted the notice of the demonic legions residing deep within the netherworld. One year after his death, Nobunaga was magically resurrected by a dark council of powerful demons.

With Nobunaga as their leader, the demons began stalking the earth and killing humans. News of these savage attacks quickly spread, and a young samurai named Samanosuke Akechi came to the fore. After many perilous battles, he finally slew the monstrous Fortinbras, King of Demons and primary orchestrator of Nobunaga's resurrection.

Yet, like Nobunaga himself, the nightmare that plagued the war-torn country would not die. In the wake of Fortinbras' demise and Samanosuke's sudden disappearance, Nobunaga has ascended the demon throne. As the demons' new king, he has vowed to achieve his original goal of forcing all Japan under his oppressive rule.

It is now ten years after Fortinbras' defeat. A warrior named Jubei Yagyu returns home to his remote and once vibrant village only to find it in ruins, destroyed by Nobunaga's minions. With vengeance in his heart, Jubei embarks upon a quest to gather the five sacred Oni Orbs which will reveal his ultimate destiny. Along the way, he must earn the respect of confidants to help him battle Nobunaga's demonic army, overcome an onslaught of traps and defeat the new King of Demons.

Basic combat in Onimusha 2 involves physical and magical attacks which are each mapped to one button, issens; counter moves performed by attacking an opponent immediately before they strike the player, and targeting, which powers up the next strike if held long enough.

Movement is controlled with the directional pad, and dodges and backsteps can be performed during combat by pressing in a direction away from the enemy the player is targeting. If a player obtains enough purple souls, they can temporarily transform into an Oni and gain improved combat abilities. Defeating enemies yields red souls, which can be used to power-up your weapons, in addition to souls that restore health, magic power, and oni power.

Onimusha 2 introduces a new friendship mechanic to the series which allows players to give gifts to several secondary playable characters. Becoming friends with these secondary characters can result in many alternate cut-scenes throughout the game, as well as playable scenarios.

A basic samurai sword that you begin the game with. It has been passed down through the generations in Jubei's family and lacks magical power.

Found in Yagyu Village only after Jubei gains the power to collect souls, the Buraitou is a samurai sword imbued with the power of thunder. Using its magical ability will release a flurry of lightning-charged strikes on a single enemy.

Found in the Imasho Gold Mine, the Hyoujin-Yari is a pole-arm that contains the power of ice. Using its magical attack will cause Jubei to slam the pole-arm into the ground, creating a blast of ice that inflicts damage on enemies within a certain area.

A wind-imbued naginata found in the Fog Valley. The Senpumaru's magical attack creates a large tornado that draws nearby enemies towards Jubei and damages them.

A hammer that contains the power of earth. It is found within the main room of the Oni Palace. Using the Dokoutsui's magical attack creates an earthquake, heavily damaging all on-screen enemies.

A broadsword containing the power of fire, the Rekka-Ken is a secret weapon found in Gifu Castle and cannot be upgraded. The Rekka-Ken's magical attack unleashes a circle of fire around Jubei.

A traditional bow that can be used to fire regular or fire arrows.

A sengoku-era rifle, that is an advanced model of the Mattlock from Onimusha: Warlords.

"An ambitions young warrior and the hero of this story. The first leader of the Yagyu clan and originator of shin-in style. sword combat. Also known as Sougen Yagyu or Sekisyusai. All leaders of the Yagyu clan are given a childhood name of Jubei."

"A fencer who wears western style armor and wields a western sword. She is breath-taking but mysterious. Her past is shrouded in mystery."

"A master spearfighter in the Houzouin style. He is a monk who loves money."

"A Fuma Ninja who works for the Hojo clan. He confounds his opponet with his agile movement and countless Ninjutsu."

"The leader of the "Saiga Shu" gun troop in Kii prefecture. Bold, bright and cool-headed, he is good at handling both a gun and sword."

"An ambitions warlord, determined to rude Japan with an iron fist. In league with demons, he orders his troops to attack Odani Castle." 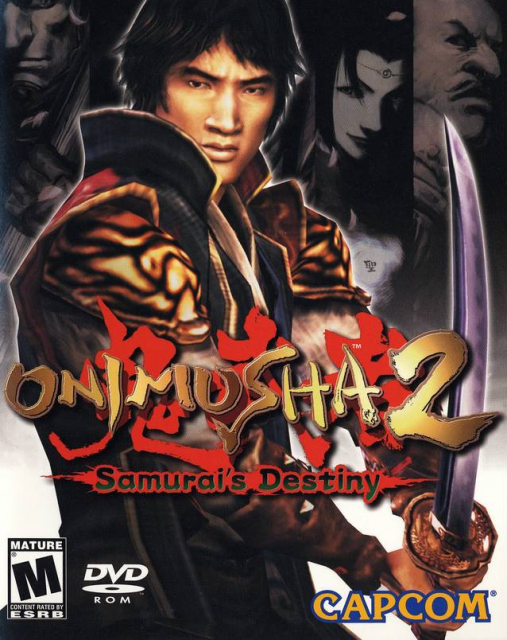