Take control of massive armies as you battle to conquer the known world. Be it on the battlefield or on the world map, besiege cities and route enemies. All for the ultimate goal of crushing the senate and ruling Rome.

Rome: Total War is a critically-acclaimed historical strategy game by British developers The Creative Assembly. It was originally released for PC on September 22nd, 2004. Although initially published by Activision, later versions of the game have been released by Sega, who acquired The Creative Assembly after Rome's release. A version was released for Mac OS X by Feral Interactive in 2010.

Like its predecessors Shogun: Total War and Medieval: Total War, Rome: Total War features a unique combination of turn-based empire management and real-time battles. It is the first game in the series to use a fully polygonal engine, replacing the 2D sprites of Shogun and Medieval with fully animated 3D models.

The main campaign sees the player take charge of one of three great Roman houses — the Julii, the Scipii and the Brutii — with the goal of siezing the Republic and forging an Empire. After completing the campaign, other factions are unlocked for use. Factions can also be unlocked by destroying them in the campaign.

As with previous Total War games, the primary objective is to raise large armies to conquer provinces and cities which will grant you income from taxes and allows you to expand your empire. The ultimate objective is to capture 50 provinces and control Rome itself, though this can be reduced through the option of a shorter campaign. The player begins the campaign by choosing one of three Roman factions — the Julii, the Scipii or the Brutii. It is also possible to unlock more factions by defeating them campaign, allowing for a greater variety of gameplay.

Rome Total War's multiplayer has been the subject of some criticism. Some players consider many of the units to be overpowered, meaning that even the faction you pick before the game even begins may determine the outcome of the fight.

The main element of the single player experience, the campaign allows the player to have complete control over the political, social, economic, and military elements of one of the 19 (not include the rebels) factions in the game. Each of the factions represent a different empire or political bloc from the ancient world.

Every faction in the game owns family members that rule your settlements and your army in battle. You start the game with some family members and during the game-play you get more by birth or marriage your daughters to other noble men.

The family members along with diplomats, spies and assassin's die in time but you recruit or you get more during the game.

The family members gain traits from academies, temples and from events that happens during the gameplay .

Some traits are giving positive stats to your family members and some of them negative which sometimes it turns dangerous for your settlement's stability.

The diplomats are very important units in the game.

They are the ones that arrange your trade with other factions alliances or even enemies.

You can obtain map information if the other faction agrees.

Also you can bribe an enemy army or family member and if you have the money and they are the same units with your faction army , they can join you.

You can also use the spies to find armies that are ready to ambush and also to find enemy assassins.

If you send to many spies into one settlement then the public order of that settlement is reducing and in many cases they rioting.

Also if you keep to many spies in your settlement then you make it hard for enemy spies to enter your city and get information.

The assassin's duty is simple but important.

You either send him to sabotage the enemy buildings and in that case you delay the enemy to train more units or even lose public order and money from trade. Otherwise you can use the assassin to kill family members, diplomats, other assassins or if his rank is high, spies.

Ports can be build in regions with a coastline. Building a port allows the region to make use of naval trade routes, which are one of the most lucrative sources of income, and allows the recruitment of Warships. More developed ports can recruit better Warships and support more trade routes.

Warships serve many roles. They can be used to protect a port, or besiege an enemy's. They can raid enemy trade routes, cutting off a vital supply of income. Troops and agents can be transported by sea using a fleet. Warships can also engage in combat with enemy warships, although naval battles can only be resolved automatically by the AI. Like infantry units, warships gain experience as they engage in combat.

The player has the ability to jump right into a quick and random battle with this mode. Unlike the Custom Battle where the player can choose their faction and units, in this mode the player can be evenly matched, have an advantage, or be at a disadvantage. The battlefield can also range from cities and towns to open fields and mountains.

If the player wishes to jump right into the tactical combat element of the game they can do so by playing a Custom Battle. In this mode the player has the ability to join a custom battle in which they select an available faction and particular units for themselves as well as their computer opponent.

Players also have the ability to participate in some of the greatest battles in the ancient world such as the Battle of Lake Trasimene and The Battle of Carrhae. Unlike the custom battle, players do not have control of choosing their units as the scenarios maintain some historical accuracy.

The Julii faction is based on the family of Roman general and statesman Gaius Julius Ceasar who led the conquest of Gaul. Upon his return, Ceasar dragged Rome into a civil war, paving the way for the transition from Roman Republic to Roman Empire. The Julii are positioned to the north of Italy, making Gaul a ripe target for expansion. Their unique units include the Urban Cohort, the most powerful infantry unit in the game, and the Samnite Gladiators.

The backbone of the Roman army are the legionnaires, incredibly versatile heavy infantry. Romans can also make use of advanced siege weaponry. The Roman factions are unique in that after the construction of an imperial palace their unit roster completely changes — this is justified as the Marian reforms being implemented. Each Roman faction has a unique gladiator unit available to them.

The Scipii faction is based on a Roman family which included the general Scipio Africanus who defeated Hannibal at the final battle of the third and final Punic War and the senator and general Scipio Aemilianus who led the destruction of Carthage.

The Scipii have a very similar army structure to the Houses of Julii and Brutii.

The Brutii were a family in ancient Rome that included a number of famous figures including the Roman politician Brutus, most famous for his prominent part of the assassination of Julius Caesar.

The Brutii also have a very similar army structure to the Houses of Julii and Scipii.

S.P.Q.R. stands for the senate and the people and Rome (Senatus populus que Romanus). It was the capital of Rome, the house of the senates and their Caesars. From there the Roman Empire was controlled.

Germania is actually the Latin word for the area of land on the east bank of the Rhine. However this region historically was occupied by many different tribes, not all of which were Germanic, so there was no single cohesive faction that existed in the days of Ancient Rome.

Gauls are a warlike barbarian tribe from northeast Europe.

The Briton faction were similar to the Gauls in many ways. They are also Celts and they had trading links to the whole world.

Also known as the Celtiberian Confederacy, Spain was a Carthago-Barbaric faction that resided in the Atlantic and Mediterranean coasts. Many North African and Germanic peoples migrated to Spain by 1000 B.C. and soon the different immigrants merged into being the Caltiberians, who were the first to rule over the Spanish peninsula. Soon when the Romans began to expand, they introduced the Celtiberians to the latin language. Spain was seen as a colonizing opportunity of many Mediterranean powers and while the Carthaginians lived with the Celtiberians in harmony, Rome captured it by force taking 200 years to fully secure Spain in the Punic Wars.

The Greeks had a great impact on all civilizations of the known world and were the founders of philosophy, mathematics and science. Their explorations and colonization reached from Spain to Russia.

The Greeks were the first to defeat the Persian Empire. They had the most powerful military unit, the Spartan hoplites.

Only in Sparta and Syracuse you can train the Spartan phalanx unit.

The Seleucid Empire are the heirs of Alexander the Great and they are those who inheritance the fallen Persian empire. But the heirs of Alexander the great were too greedy and they wanted more power and land thus their fall over the time. Their units range from long speared phalanxes to chariots, cataphracts and war elephants. They have even adopted the roman legionnaire units. They begin in what is now the Middle East fighting against Egypt, and Pontus for supremacy.

Macedonia is the kingdom that actually united the city states of Greece. With Alexander the Great as a leader, the Macedonians conquered the known world! They were the ones that crushed the Persian empire, conquered the Egyptians and even built the Pharos of Alexandria. After Alexander's death the conquered kingdoms were under rule by Alexander's generals and they formed the Seleucid empire.

The Parthians were historically raised after the fall of the Seleucid empire. They control an interesting portion of units like their powerfull horses and elephants. In the game, they face the Scythians, the Seleucid Empire and the Armenians for supremacy. In history the Parthians were one of the few factions that acctualy defeated the Romans invaders while defending their lands.

A remnant of a Phoenician colony, The Carthaginians were at one point Rome's mortal enemy, facing off in a series of conflicts known as the Punic Wars.A naval power, their navy was envied even by the Romans and it even inspired the Spanish to create powerful ships against their Roman foes. Hannibal, a particularly talented military commander, almost destroyed the Roman Empire having made a difficult journey across the Alps in northern Italy. He even reached the outer wall of Rome its self. It was the wars with Carthage, with Hannibal that ultimately leads Rome to extends its power into what is today Spain and norther Africa.

The Egyptians in their early history were able to establish one of the most advanced kingdoms in human history. Experts in astrology, mathematics and trade the Egyptian civilization lasted for hundreds of years. Equipped with powerful chariots and spearmen in conjunction with order and faith to their pharaohs, the Egyptians rivaled the Romans in discipline and loyalty. In the game they are settled in Egypt, Jerusalem and Palestine and they even have in their control the island of Cyprus. They come in conflict with the Seleucid empire for supremacy.

Like most games in the series, Rome: Total War is scored by Jeff Van Dyck. 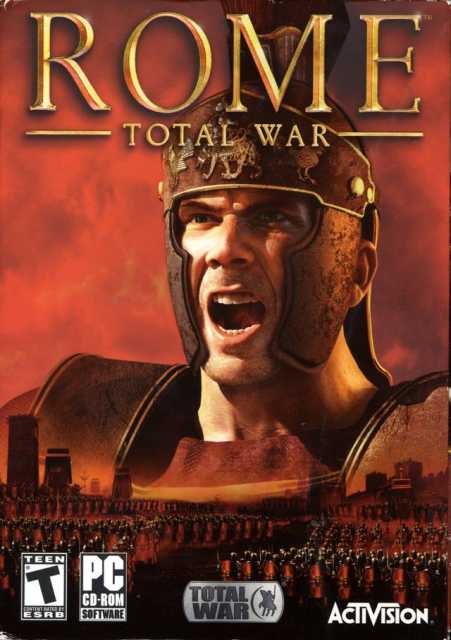