Sort of a spin-off game to the Genesis game known as Rocket Knight Adventures. A Genesis game was released at the same time but was a more direct sequel.

Sparkster and its prequel, Rocket Knight Adventures, were released at that time in the nineties when tons of mascot based platformer games were being released. Like many of those competitors, Sparkster is a 2D platformer starring an anthropomorphic animal. The twist in this game is Sparkster's rocket pack, which can be used to fly around the level in eight directions for short bursts. Sparkster's quality and pedigree as a Konami game helped ensure it would be more memorable than Bubsy or Aero the Acro-Bat ever were.

Sparkster controls like a typical 2D platformer. Many areas feature thin ledges that can be grabbed by Sparkster's prehensile tail and climbed around on. A regular attack with the sword also launches a projectile across the screen, and holding down the button after attacking will charge the rocket pack, which takes about a second. Once charged, holding a direction and releasing the button will send Sparkster shooting away. While dashing with the rocket pack Sparkster will ricochet wildly off walls, floors and ceilings, which is sometimes the only way to reach a certain area. Sparkster can also use a flip move by pressing the R and L buttons, which will cause Sparkster to quickly flip right or left. This can be done in mid air and is a great way to get around, but using it too many times in a row makes Sparkster dizzy and unable to move for a while.

In addition, Sparkster has a few unique levels that switch up the gameplay. There's a level where Sparkster pilots giant mechanical ostriches, which run automatically. He can fire ripple laser shots from the bird's mouth and make it go up and down to grab crystals as it speeds by. Towards the end of the game, there is a section where the player controls the game as a top-down shooter. That level's boss fight involves piloting a fighting mech, which is controlled by pressing the R and L buttons to punch with the respective hand. 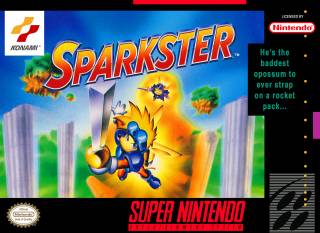