Emperor: Battle for Dune puts you on the desert planet Dune, to command many different units and bring victory to the Great House you represent.

The game is full 3D, but unlike the previous games is not viewed from an isometric perspective, as it is possible to zoom and rotate the camera. The game puts you in the role of a new commander of whichever faction you choose to play for. The mission objectives vary from resource gathering to destroying a specific enemy structure or the enemy itself, though the latter is most common. Most missions have secondary objectives, which are optional to complete but offer rewards - such as an alliance with a sub-faction or reinforcements. To complete the objectives, you build buildings, units and gather a single resource - Spice. Resource gathering functions largely in a similar fashion to games in the C&C universe. The game features a map of the planet, in which you take turns with the AI to choose which territories to attack, after which the game switches to RTS mode. Emperor: Battle for Dune also features deployable units (mortars, for example).

Like previous Westwood games and Dune 2000, much of the story is told through live action cutscenes. some actors from Dune 2000 return like Musetta Vander as Lady Elara and Adrian Sparks as Emperor Corrino. The game also features many new actors like Vincent Schiavelli as the Harkonnen mentat Yanich Kobal, Michael Dorn as Duke Achillus and Nicholas Worth playing the Atreides mentat Kolinar Koltrass. The style of the costumes and sets is inspired by the David Lynch movie Dune, which was based on the first Dune book.

The three factions are different from each other an feature their own unique units, although some units are recurring among all factions, but with different attributes. The evil Harkonnen are brutal and all about power, they have the most powerful units in the game and have a powerful air force. The noble Atreides are the balanced faction, they are proficient in both offensive and defensive manoeuvres. While the insidious Ordos are the hit-and-run, deceptive faction that utilizes units such as suicide bombers, fast but not very durable laser tanks, and their superweapon makes enemy units attack each other. Each faction having mostly of unique units is a big change from the previous instalments in the series.

The story takes place shortly after the events of Dune 2000. Emperor Corrino has been killed by his Concubine Lady Elara and the Landsraad (the assembly for all the nobles in the Imperium) has descended into chaos. The Spacing Guild makes a proposition to the three remaining houses strong enough to control Arrakis, House Atreides, House Ordos and House Harkonnen, that whichever house wins a War of Assassins on Arrakis will become the leader of the Landsraad and the leader of the faction will become the new Emperor of the universe.

As the game progresses it becomes clear that the Tleilaxu are collecting samples from dead sandworms for some nefarious plan. After the player has defeated the last house on its home planet the plan is revealed. The Spacing Guild, with the help of the Tleilaxu, have bioengineered an Emperor Worm with huge psychic powers (empowered by Lady Elara) to control the entire production of spice. They have also poisoned the water supply on Arrakis, turning many into mindless slaves for the Tleilaxu. The Spacing Guild abandons the player on the homeworld of the losing house, but with the help of smugglers the player is able to return to Arrakis and defeat the Emperor Worm before it fully awakes.

House Atreides is a noble house from the water-planet of Caladan, a lush and fertile planet. House Atreides has a just and well organized government that provides for its people which has resulted in a great sense of loyalty in the population, making the Atreides army one of the most just and deadly in the galaxy. They are often allied with the Fremen and have a long lasting feud with the Harkonnen.

House Atreides ruled by Duke Achillus who represents many of Atreides virtues. He is just and intelligent and he does not just want Arrakis for himself and his house, but for the entire universe.

House Harkonnen is an evil and ruthless house that rules through fear and terror. Their home world is Geidi Prime, an industrial wasteland. However, the harsh and brutal conditions have also made the Harkonnen army very dangerous, as the troops either face death on the battlefield or a slow, painful death in the Baron's torture chambers. Because of this, the Harkonnen troops often fight with more ferocity on the battlefield to avoid such a horrible faith.

House Harkonnen is ruled by Baron Rakan (and later one of his sons, depending on the choices the player takes in the game) an obese, sickly man who views torture and death like a leisure hobby. However despite his piggish exterior he is devious and methodical man who will do anything to retake Arrakis.

House Ordos is a very secretive house and very little is actually known about them, which is exactly what the rulers of the Ordos want. They are ruthless and cold, at times more like machines than humans. They specialise in trade and smuggling and have been known to use forbidden technology. They are from the planet Draconis IV, an ice planet.

The leader of House Ordos is the Executrix Council, four beings sharing one mind. A mysterious man known only as the Speaker speaks for them with four different voices. The council is only concerned with profit and will not tolerate defeat on Arrakis.

The Spacing Guild has a monopoly on interstellar travel as they are the only ones with the technology to make "navigators", humans mutated by the spice who are the only ones able to pilot the massive Heighleiners. Therefore all long distance travel in space is done by the Guild, and the houses have to pay a price to travel with the Highliners. In the game the Guild not only wants to have a monopoly on space travel, but also on the spice.

The Tleilaxu are a group of secular, religious fanatics who consider machines to be evil. They have developed gruesome biotechnology and they use it as bases for their weaponry. The Tleilaxu despise the Ix and the player can only ally with either the Tleilaxu or the Ix, not both.

The Fremen are the indigenous people of Arrakis. They are fierce and strong warriors who know Arrakis like no others and are able to use the knowledge of the land and the sandworms to their advantage in battle. They are usually allied with House Atreides or House Ordos, but they hate the Harkonnen and will rarely have anything to do with them.

The Ixian are fascist state where an elite group of scientist rule over the lower classes who are forced to make the Ix technology. They have a great fondness for technology which is obvious in their advanced weaponry. They hate the Tileilax and will not trade with anyone who has already traded with the Tileilax.

The Sardaukar were the Emperor's shock troopers. Fiercely loyal, the lack of an emperor to command them has left them with no purpose. The Sardaukar travel to Arrakis in the game in order to support whichever house proves to be the strongest.

The Sardaukar home world is a harsh and desolate world and the training for the Sardaukar is so intense that many do not survive, which makes them very deadly and and entirely fearless warriors. 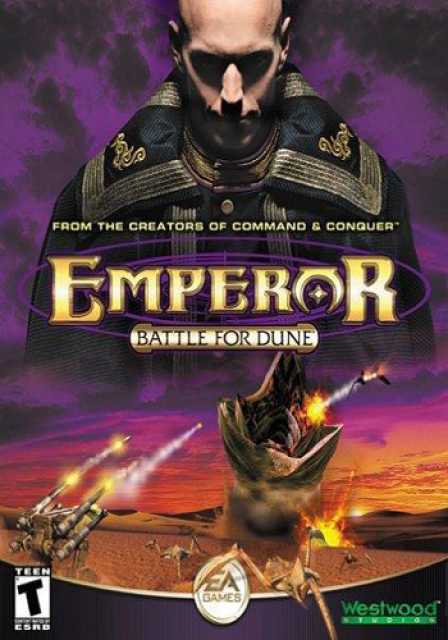