Initially a freeware "Metroidvania"-style 2D platformer game created entirely by Daisuke Amaya for the PC, Cave Story follows the tale of a silent amnesiac in a long-winding cavern filled with monsters (including the friendly rabbit-like Mimigas). It received numerous enhanced ports by Nicalis for computers and Nintendo consoles.

Cave Story (known in Japan as Doukutsu Monogatari, literally translated to "Cave Story") is a 2D freeware action-adventure platformer developed by Daisuke Amaya (better known as "Pixel") for the PC on December 20, 2004.

Initially created over a period of five years, Cave Story is a "Metroidvania" style platformer where the player (as the silent amnesiac Quote) explores a vast cave filled with dangerous enemies and friendly inhabitants (the rabbit-like Mimigas).

Along with numerous unofficial translations and source ports (including ports for the Mac, Linux, Amiga, PlayStation Portable, Dreamcast, GameCube, Xbox, and Sega Genesis), the game received an enhanced port by Nicalis, sold on Nintendo consoles and PC storefronts (including Steam and the Humble Store). Featuring new game modes, enhanced visuals (Wii, PC-based, and Switch versions only), an official translation, and multiple arranged soundtracks, this version was digitally sold for the Wii (via WiiWare) on March 22, 2010, the Nintendo DS (via DSiWare) on November 29, 2010, computers (PC, Mac, and Linux) as Cave Story+ on November 22, 2011, the Nintendo 3DS (via eShop) on October 4, 2012, and the Nintendo Switch (both digitally and in retail boxed form) as Cave Story+ on June 20, 2017. The game was also remade by Nicalis with 3D polygonal graphics, sold as Cave Story 3D in retail boxed form by NIS America (Nippon Ichi in Japan) for the Nintendo 3DS on November 8, 2011.

The story follows Quote, a "soldier from the surface" who awakens in a cave with no prior memories. He moves through a network of caves and discovers a village of Mimiga, rabbit-like humanoids terrorized by abductions at the hands of "The Doctor". As the game progresses, Quote learns that he is on a floating island, naturally inhabited only by Mimiga. The Doctor, having arrived on the island with a human research team, has hatched a plan to conquer the surface world, using the island's magical "Demon Crown" and the Mimiga's susceptibility to rage-inducing "red flowers". Quote, his own identity still uncertain, is enlisted by the remaining researchers and Mimiga to stop the Doctor and restore order to the island.

Though the game does not place a heavy emphasis on player choices or branching storylines, both are present to some degree. For example, the player can easily choose to bypass the first fight with Balrog. Such minor decisions often have no impact on the larger story, but others can be hugely important to the progression of the plot. For instance, at a certain point, the player can choose to end the game early and earn the "bad" ending. Alternatively, if the player succeeds in following a specific sequence of sidequests and decisions, an extra area and the "good" ending will be unlocked near the end of the game. Otherwise, the player will earn the standard "normal" ending.

Cave Story controls very similarly to early SNES action titles. The player uses the arrow keys to move, the Z key to jump, and the X key to shoot. Throughout the game, the player can collect a number of necessary and optional weapons, which can be linearly auto-upgraded by collecting experience points from fallen enemies. Each weapon in the game can be upgraded to a third level. The player loses experience, which can result in a weapon downgrade, by losing health. The A and S keys are used to cycle through weapons. The Q key is used to open the inventory, from which the player can view and use items. The W key is used to view the map (once it has been acquired). The game also has native game-pad support. All of the key functions can be modified in a separate application, which also handles graphical settings.

The game world is split into a number of areas, connected by teleportation devices and/or direct passages. Progression often requires backtracking into previously traversed areas. Through close exploration, the player can collect optional weapons, items, health-expanding Life Capsules,and missile capacity-expanding Missile Expansions. Due to the game's lengthy and nonlinear nature, save points and health-restoration machines are found at certain points. The story is advanced at certain junctures by dialogue and simple in-game animations.

The amnesiac silent protagonist, one of the robotic soldiers originally sent to eradicate the Mimiga.

A female robot soldier who, similarly to Quote, found herself on the island with no memory; she is Quote's closest ally.

The main antagonist, a power hungry man bent on using the Mimiga to conquer Earth; his power stems from the Demon Crown, an evil artifact he found on the island.

A powerful witch and one of the Doctor's minions, a regular antagonist throughout the game; long ago, she convinced Ballos (her uncle) to create the Demon Crown, and is therefore cursed to obey its holder's commands.

Another of the Doctor's minions (also cursed by the Crown), Misery's sidekick and "punching bag"; he often serves as comic relief.

Daughter of Momorin Sakamoto; she was transformed into a Mimiga by Misery before escaping to the Mimiga Village.

Son of Momorin Sakamoto and brother of Sue; he escaped from the Doctor with the research team and now hopes to escape the island with Sue by hatching a flying Sky Dragon.

A member of the human research team, mother of Sue and Kazuma; she has been hiding in the Plantation since her escape from the Doctor.

The research team's elderly leader, who has escaped with the other members; he is a close friend of the Sakamoto family and often assists Quote on his journey.

The research team's cowardly engineer; he was transformed into a Mimiga by Misery before escaping from the Doctor's captivity

A young Mimiga who befriended Sue; mistaken for Sue, she is kidnapped by Misery early in the game.

The brave leader of the Mimiga Village; he is very protective of Toroko and very mistrustful of Sue.

A legendary Mimiga hero, killed by the Doctor before Quote's awakening; he was Toroko's older brother.

A powerful sorcerer, creator of the Demon Crown; he accidentally obliterated his own homeland, driving him to insanity, long before the events of the game.

An elderly witch living alone in the Sand Zone, guardian of the dangerous red flowers and Misery's mother; she imprisoned Ballos (her brother) on the island after his descent into madness. 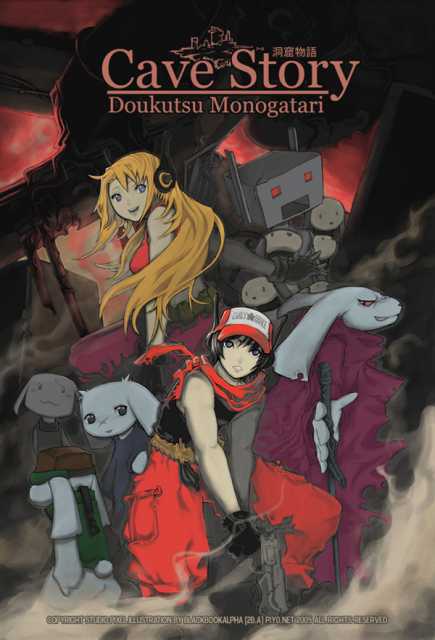