Darkwing Duck is a video game adaptation of the popular Disney cartoon that aired during the early 90s. Featuring Mega Man esque action gameplay in the city of St. Canard.

Darkwing Duck is another one of many collaborations between Disney and Capcom ( DuckTales, Rescue Rangers, Aladdin ect.) that had a golden era in the early to mid '90s. It is based on the Disney cartoon with the same name and features St. Canard's dark superhero Darkwing Duck/Drake Mallard.

The setting is pretty dark and can be compared to that of Batman but with a lot of satire and humor thrown in. Darkwing Duck was inspired by a couple of specific DuckTales episodes and both Launchpad McQuack and Gizmo Duck appear in both series, the first one being a returning character in DuckTales. A total of three seasons were made of the cartoon series with a total of 91 episodes.

The first release of the game was for the NES in 1992 and it was followed up by a Game Boy release a year later, in 1993.

The game plays pretty much like Capcom's classic super hit series Mega Man. It's an action-platformer for the NES where players can jump and shoot.

If the player should die they have to start back at the beginning of the stage. Many would claim that Darkwing is almost a direct copy of Mega Man with many stages having similar themes and similar graphical design when compared to Mega Man or Mega Man 2 stages.

At the end of every stage a boss from the cartoon awaits which is often designed as a puzzle players must work out. The stages are selected from a overview map of the city and they range from the heart of town to the outskirts. 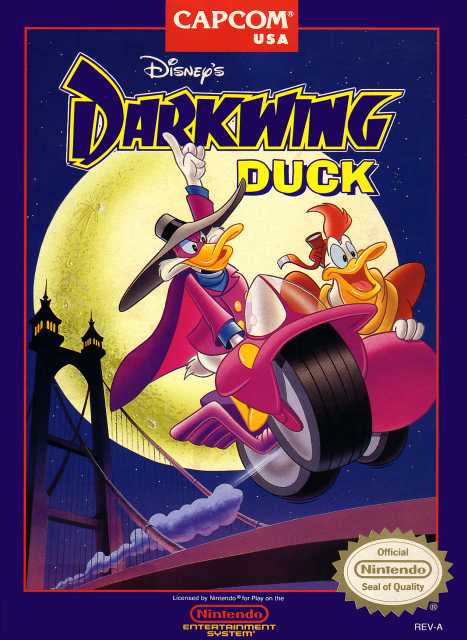