Valkyrie no Bouken: Toki no Kagi Densetsu ("Valkyrie's Adventure: The Legend of the Key of Time") is a top-down action-adventure game with RPG elements. The player, as the warrior from heaven Valkyrie, must defeat the evil lord Zouna and restore peace and order to Marvel Land.

The game plays similarly to that of The Legend of Zelda, which was released seven months prior, and could be considered one of the first games to follow in its incredibly popular footsteps. It also has a few elements from Japanese RPGs such as Dragon Quest. Players explore Marvel Land on a scrolling overworld, finding money and equipment to make Valkyrie more formidable. Valkyrie also earns experience from defeating monsters, which will eventually level her up and make her stronger, as well as give her access to powerful magic spells.

Though it borrows a lot from its influences, it itself has also influenced other games: For instance, persistent negative status effects that continue to harm after a battle is over, tents that restore the party's HP/MP on the overworld and using a boat to explore more of the world are all common console RPG elements that were first seen in Valkyrie no Bouken.

The game's Arcade and TurboGrafx-16 sequel, Valkyrie no Densetsu, would prove to be considerably more popular. The character of Valkyrie makes cameo appearances in many other Namco properties, most frequently in their Tales RPG series. 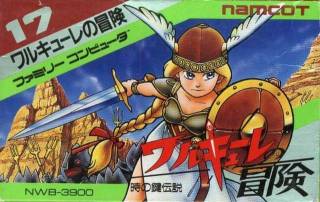