Maniac Mansion is a graphic adventure game originally released in 1987 by Lucasfilm Games. When the innocent Sandy is kidnapped by the maniacal Dr. Fred, it's up to her boyfriend Dave and his friends to her from certain death!

Maniac Mansion is a graphic adventure game developed and published by Lucasfilm Games first released in 1987 on the Commodore 64. The game was later ported to the Apple II, Atari ST, Macintosh, Amiga, DOS and Nintendo Entertainment System. It was the first game to be built in SCUMM, a game engine and scripting tool for which LucasArts became very well known and in which the "MM" stands for Maniac Mansion specifically.

The player, primarily controlling the character of Dave Miller, is tasked with rescuing Dave's girlfriend Sandy Pantz from the mansion of Dr. Fred, a mad scientist who kidnapped her for use in his human experiments. The Edison family of which Dr. Fred is a member occupy the mansion. The mansions other occupants are Nurse Edna (Dr. Fred's wife), Weird Ed (their son), as well as one large purple tentacle and one large green tentacle. If any of the family members excluding the green tentacle will kill or capture Dave and his friends if they discover them. While the plot may sound serious, the game takes advantage of a number of B movie tropes as well as a very unique style of humor that sets the game play in a funny and mostly non-threatening light.

The game play utilizes a point-and-click mechanic that became the standard for most all LucasArts game of the time period (and has seen a resurgence again in recent years). In addition to this, the game contains 15 different commands that they player may use to interact with the environments and characters.

The commands are: Push, Pull, Give, Open, Close, Read, Walk To, Pick Up, What Is, New Kid, Unlock, Use, Turn On, Turn Off, and Fix. In addition to these choices, the player is also granted a number of special abilities depending on the characters that have been chosen to accompany Dave. For example, Bernard can repair items while Michael can develop film.

Most of the story is conveyed through the use of cut scenes. In the game's opening cinematic, it is revealed that a meteor landed near the mansion twenty years prior to the game's event, that the meteor is sentient, and that it has taken control of the family, making them into the evil characters that they are.

Like many other games of the time, Lucasfilm Games was required to heavily censor Maniac Mansion before it could be released on the Nintendo Entertainment System. Because of this, the NES version is considered to be a somewhat incomplete and lacking experience overall.

A sequel to Maniac Mansion titled Maniac Mansion: Day of the Tentacle was released in 1993. As a bit of fan service, LucasArts included a full and playable version of Maniac Mansion could be found and played through an in-game computer.

A television series based loosely on the game aired from 1990 to 1993 on The Family Channel (United States) and YTV (Canada).

There were several different characters in Maniac Mansion that changed the means of solving the puzzles and finishing the game.

The party consists of three characters with Dave being mandatory. Unlike other LucasArts games, the player could die in Maniac Mansion but finish the game with two characters theoretically.

Mansion inhabitants and others:

Maniac Mansion was first conceived in 1985 by Ron Gilbert and Gary Winnick. As part of a project assigned to them by Lucasfilm Games, the two wrote and designed a game based on their love of B movies and their own unique sets of humor.

While they add the basic concepts for the plot, characters, and environment, the two designers had trouble determining a genre of game play. Only after watching his cousin play King's Quest: Quest for the Crown during a Christmas visit did Ron Gilbert decide that the graphic adventure game genre would be the best fit for their creation. From there, the two went about created a basic layout for the game in order to determine the overall structure of the game and preliminary programming concepts. At one point, Maniac Mansion was a board game playable on paper in which the mansion's floor plan was the game board and small markers were used to represent characters and items. Due to the complexity of the game's overall structure and the high number of variables, dialogue was not written until some time into the actual programming of the game.

Maniac Mansion is considered a seminal title in video game history. It was lauded for its preset number of commands that made it simpler to focus on puzzlers and where to go rather than what commands could and could not be used. Additionally, its humor-based storytelling set a standard that was followed up by a number of games including the Space Quest and Monkey Island series.

The game's lasting effect on gaming culture can be seen in recent years as well in which fans have created a new version of the game featuring updated graphics and audio, an episodic series of games based on the universe, and live action trailers depicting a fictitious film based on the game.

Due to the strict guidelines Nintendo of America placed on developers, several changes had to be made to the game in order to be released on the NES. Things like profanity had to be removed or edited, for instance Dave's opening line of "Don't be a shit head" was changed to "Don't be a tuna head" for the NES version.

Other less noticeable things were changed in order to meet Nintendo's standards. For example in the Mansion's arcade room, an arcade machine named "Muff Diver" had to be changed to "Tuna Diver", or a medical chart in Dr. Fred's office originally had a caption for the brain that read "Chewy caramel center", which was changed to "Pretty brains"

The characters themselves or some of the dialog involving characters had to be changed. One exchange between Ed & Edna was as follows. "Well, Mommy, I'm worried about him. Well, Mommy, I'm worried! He hasn't eaten in 5 years. YEAH, SO!!! and he's been bringing those bodies, and he carries those bodies to the basement at night." Nintendo however felt that this exchange indicated that Dr. Fred was a cannibal, even though game designers insisted that was never their intention. The text was eventually changed to "He hasn't slept in 5 years!"

Perhaps the biggest change to the NES version was to the character of Edna. In the earlier versions of the game some of her lines were somewhat sexually suggestive, for example when someone calls her from the phone in the library, she says "Is this a prank phone Call? There's no heavy breathing. Let me show you how to do it." While she says some sexually suggestive things, she is generally portrayed as being pretty sane in earlier versions of the game, whereas in the NES version she seems to be a little bit more off her rocker. 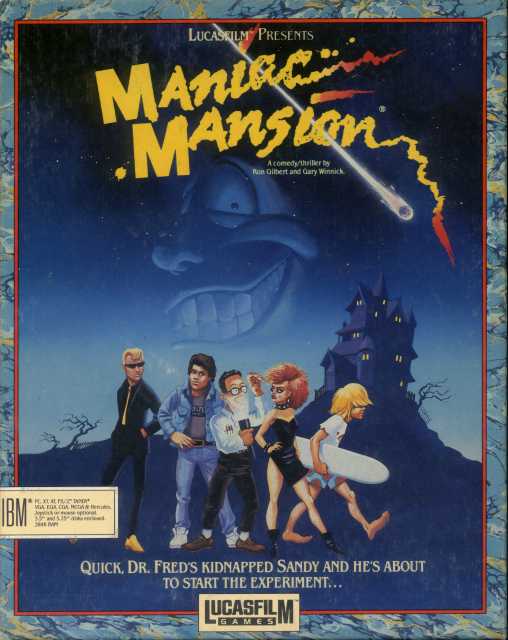