In this PS3-exclusive first-person shooter, players fight a group of rebels who don't like the Mantel megacorporation, only to discover that his obviously evil bosses aren't the good guys after all.
PlayStation 3

Haze is a first-person shooter from Free Radical Design (the now defunct studio who renamed to Crytek UK), the development studio responsible for the TimeSplitters series. Rather than sticking with the developer's multiplayer-heavy roots, Haze is more of a story-driven, single-player-focused game. The game does have a multiplayer mode though, as well as a four-player co-op option for the story. The game was published by Ubisoft in all territories. When it was first announced, it was supposed to be on the Xbox 360 and PC as well as the PlayStation 3, but at some point in the game's development, it went PS3 only.

Prior to game's release, Haze made an affiliation with Korn. This spawned a popular internet meme from the reactions of the cast of the HotSpot podcast to Johnathan Davis' agent's quote on the game which is: "Gaming for me is a religion, and Haze is the shit! I had to come up with a track that can hit up that kind of rush I get from the game, and I think we really rocked it!!"

Players take on the role of Shane Carpenter, a newly-enlisted soldier with the Mantel Corporation, who is entering into a foreign country, ostensibly to fight a dictator that they have nicknamed "Skin Coat," due to reports of natives being skinned and eaten alive. Soldiers working for Mantel are suited up in intelligent armor that monitors health and delivers a steady supply of a drug known as Nectar. Nectar can also be manually administered, giving players extra speed, more health, and greater accuracy while active. Nectar withdrawals, however, are a nasty thing, and after a couple of brief missions, you're shown exactly what Nectar is doing to the soldiers.

It is no surprise that Carpenter switches sides over the course of the game. Bizarrely though this also cannot be considered to be a spoiler either as publisher Ubisoft went as far as to reveal that this occurs on the back of the game's packaging and during its marketing campaign for the game despite the fact that this is treated as a major narrative plot twist within the game, which in turn confuses many players who are aware of this information.

Besides the single-player campaign, Haze has four-player co-op throughout the story and a 16-player multiplayer component with three basic modes. The rebel and Mantel units again collide here, with the Mantel troops having the ability to use Nectar and the rebel troops using the ability to play dead, which makes them disappear to the eyes of their Nectar-addled opponents.

In Haze you acquire many new weapons designed either for Mantel or The Promise Hand.

Throughout Haze, you are able to drive/pilot many different vehicles.

Upon release, Haze received mostly mediocre to low review scores. A notable exception to this was Famitsu which gave the game a rating of 34 out of 40. The game was criticized for a poor story, annoying exposition methods and characters, unimpressive graphics, a low number of multiplayer modes, and AI that was prone to glitching out in both the campaign and deathmatch games- and was still terrible when it wasn't. Some elements received a more neutral response, such as the feel of some of the game's weapons and some elements of the multiplayer.

Haze was one of the few third-party exclusive titles released on the Playstation 3 in 2008. Its sales did not meet expectations, selling less than 500,000 copies that year. This is widely considered to be a major factor in the closure of Free Radical, which took place on December 18, 2008. 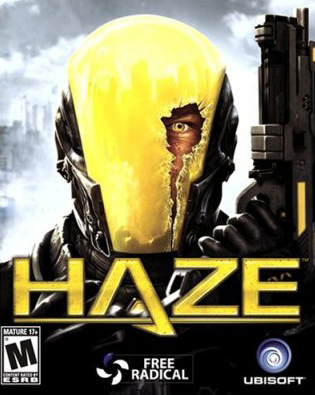