Based on the original PlayStation game of the same name, Warhawk for the PlayStation 3 opts for team-based multiplayer action on the ground and in the air instead of single-player flight combat.
PlayStation 3 PlayStation Network (PS3)

Warhawk is a remake of a PlayStation launch title of the same name. It was developed by Incognito Entertainment for the PS3 and released on August 28, 2007. Warhawk is strictly a multiplayer experience, though a single-player mode was planned and scrapped. Warhawk marks the first time a PlayStation 3 game was released on both Blu-ray disc and as a download through the PlayStation Network. While the two versions are compatible, there were some differences. While the PSN version was cheaper, the disc-based version included a number of behind-the-scenes featurettes, as well as a Bluetooth headset for in-game voice-chat. The disc based version also lets you host Warhawk Lan Parties with only one copy of the disc between multiple PS3's.

Warhawk supports online multiplayer matches with up to 32 players in a single game and 4 way online splitscreen from a single PS3, Sony and Incognito provided dedicated servers for players to play on, additionally individual players could also create their own servers. Though the player begins as a bare soldier armed only with a combat blade and pistol, he can jump into an assortment of land-based vehicles, turrets, as well as the titular Warhawks, which are essentially futuristic harrier jets, able to switch between a hover and a forward-thrust mode. The game includes Sixaxis support when piloting a Warhawk, though you can also opt for traditional, analog-stick-based controls. There are six match types in Warhawk: Deathmatch, Team Deathmatch, Capture the Flag, Zones, Hero and Collection.
The game is divided into two different factions the names of the factions are Eucadians and the Chernovans. Each have unique uniforms and vehicle designs for each, gaining experience and leveling up unlocks different uniforms and designs for vehicles, as well as various insignia that are displayed on different parts of the player and their Warhawk / Nemesis.

Assault Rifle- Shoots very fast but does little damage when far away.

RPG- Shoots missiles and also allows you to lock on to Warhawks and take them down.

Pistol- You always have the pistol when you spawn good weapon for close combat situations. It also has infinite ammo.

Knife- This weapon kills anybody in 1 hit if you manage to hurt somebody with it.

Mines- Lay these on Warhawks or Vehicles and be ready for a pretty explosion. These explode on proximity.

Binoculars- These handy little weapons are used for "air strikes" you paint whatever you want to air-strike and seconds later the air-strike will happen.

Sniper Rifle- use this weapon for very long range shooting. This is the only weapon in the game that you can aim with-press R3 to zoom in, and press it again to zoom it further.

Wrench- You can use this weapon to heal your troops vehicles or your own. You can also deal damage to the opposing teams vehicles if you hit their vehicle with the wrench.

Flamethrower- This weapon can be very deadly to anybody to close to the flame and is very handy for taking care of enemy vehicles.

Tank- Very slow but very powerful. This vehicle is mainly used to defend bases or just steam roll through another teams base. The front of the tank shoots a shell that explodes on impact damaging or even hurting anybody around the explosion. Also if you are very accurate if you hit a Warhawk with a tank shell it will automatically be taken down.

Jeep- These little cars are used to move troops across the map. The jeep has a 50 Caliber turret on the back which can damage other  vehicles and players.

Warhawks- These vehicles can be very deadly in the right hands. Warhawks are what this game is all about. They are very fast and can deal massive amounts of damage with all the weapons they can carry. They are fragile so watch out for RPG's or tanks before flying to close to other players.

APC- Included in Operation Broken Mirror. The APC is a large ground based transport unit that can also serve as a mobile spawn point. The APC has no weapons, but includes a deployable shield generator that units on the outside can not shoot through. However, the generator can be short circuited by a fully charged lightning gun. If you spawn into to APC you are awarded a random weapon. The APC also has a charge move that will cause it to accelerate forward at high speeds. The charge move can damage and destroy ground units. Jeep in one hit. Tank in two. Ect..

Dropship- Included in Operation Omega Dawn. The Dropship is a air based transport and attack unit that can carry people as well as jeeps. The Dropship has two flight modes similar to the Warhawk: a hover mode were it can fire weapons and a flight mode for faster travel. For each teammate that is traveling in the Dropship another rocket turret becomes controllable. This makes a fully loaded Dropship a powerhouse. The pilot of the Dropship can also control side mounted guns while in hover mode. If you fill a Dropship with players you will receive a trophy.

Weapons for the Warhawk and Dropship

Aside from your normal machine gun turrets, the Warhawk and the Dropship can obtain weapons which are in the air for more damaging effects to air-based strategy/choke points, turrets, bases, or even enemy Warhawks.

Swarm Missile-You start off with 5 of these when you are within a Warhawk. Multiples of these can lock onto an enemy Warhawk, but they don't do very much damage. They also don't lock on very well and can be evaded fairly easily. However, they are great for applying constant pressure in dogfights.

Homing Missile-These are insanely strong missiles that are much harder to avoid. These are brutal.

Air Mines-Like mines, but in the air. They're pretty easy to see, but can ensure that your opponent does not get to a specific point in the map. Also can be hidden in clouds, and be careful! They can blow you up as well.

Lightning Bolt-Lightning bolts are one of the most deadly things to use on your opponent's base. You get 10 ammo, but you can shoot one charged burst by holding R1. This makes the lightning bolt last for a while, destroying anything within its radius.

Stealth-Stealth makes you-almost-invisible. You can still see an outline, but unless you are an idiot, they shouldn't be able to see you. Perfect for getting behind your enemy.

TOW Missile-Missiles that you can direct and have a pretty large blast radius. Perfect for getting rid of choke points and bases from afar.

Cluster Bomb-Little bombs that bombard the ground below and blow up. Great for objective based games like Capture the Flag, since you can stop them in their tracks from way up in the air.

Flak-Gets rid of any incoming locked on missiles. Useful for getting out of a hairy situation.

Warhawk features an in-game ranking system based on the points accumulated during online matches, and a few other requirements, including obtaining certain badges and ribbons.

[Update] A Warhawk room has been released early this year in which players launch a game from.

Warhawk has been supported with additional content, including Maps and new vehicles. Two booster packs have been released so far (as of end of July 2008) with a rumoured third booster pack currently in development

Several patches have also been released, most of which include new gameplay features

Sony Europe announced trophy support will arrive alongside patch 1.5, August 27.  Dylan Jobe announced that trophy support will launch in America alongside patch 1.5 on August 28 and will cost $7.99.  The trophies will be divided into four categories: Community Building, Game Mode, Vehicle Weapons and Warhawk Weapons.
Game director Dylan Jobe has confirmed that some trophies will work retroactive, and that the Platinum trophy will not require purchase of extra booster packs. 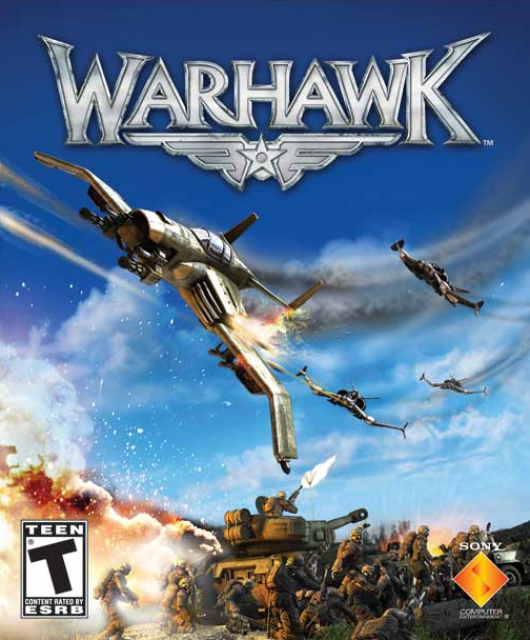