A GameCock published Xbox Live Arcade game that aims to answer one of the most important questions: could Pirates really beat Ninjas in a game of dodgeball?

Pirates vs. Ninjas Dodgeball is a simple competitive sports game that twists the traditional rules of dodgeball to create a more fast paced version. The characters in the game, primarily pirates and ninja, are a result of the classic Internet meme of "Who would win in a fight, Pirates or Ninja?". Published by GameCock Media, Pirates vs. Ninjas was released on Xbox Live Arcade on September 3, 2008, and is set for a future release on Nintendo Wii. The Wii version will presumably include more options, as the limited release of the XBLA edition could not possibly be translated to a full retail release. It is expected in the first quarter of 2009.

There are three main modes of play, each for up to four players, either locally or online. Most game types centre around the basic idea that the first team to run out of all its health will lose the game, and there is little variation between them. Throwing, catching and deflecting balls are performed with the face buttons, with a basic dodge function on the right stick. Balls are picked up automatically when a character is near them. If a thrown ball is caught, the thrower loses health while the the catcher regains some. If a ball deflects it has a chance of hitting the original thrower, but they can also either catch it or deflect it yet again, leading to some volleyball- or tennis-like rallies between teams. Each individual character has a special ability, for instance one of the Ninjas can become temporarily invisible. Additionally, characters can attack with weapons when not in possession of a ball in order to put opponents off.

The team list includes Pirates, Ninja, Robots and Zombies, with other teams being made available as downloadable content in the future. Each team has four playable characters with their special ability: 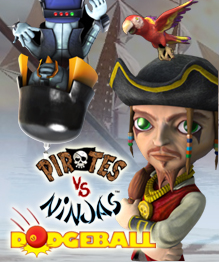