This installment of Silent Hill sees a new character, Alex Shepherd, returning home from military service to find his family in disarray. To save his brother, Josh, he must enter the macabre town of Silent Hill.
Xbox 360 PlayStation 3 Xbox 360 Games Store

Silent Hill: Homecoming is the sixth installment of Konami's popular survival horror series. It was officially announced on July 11, 2007 and was released in September 2008. Homecoming is the second Silent Hill game to be produced by a Western developer for home console; the first being Silent Hill: 0rigins for the Sony PSP. It was developed by Double Helix for the Xbox 360 and PlayStation 3. The PC version of Homecoming was released in November 2008 as a Steam-exclusive title in North America, with a retail version released three months later in Europe.

Players take the role of Alex Shepherd, a Special Forces soldier returning to his hometown of Shepherd’s Glen after a brief tour of duty overseas -- only to find his father and younger brother Josh missing, and his mother in a coma. Alex begins a search for his brother between his hometown and the fog-covered supernatural town of Silent Hill.

The gameplay is focused on a mix of exploration and combat. The player advances through the story by fighting the grotesque monsters that reside in Silent Hill, resolving puzzles, searching for items and clues, and occasionally selecting responses when branching conversation trees appear during certain encounters in the game.

The game utilizes Alex's military training, in the form of gameplay mechanics such as evasive movement and grapples. Alex and his enemies also have real-time wounds appear on them as they take damage. Objects in the world have realistic physics, so if Alex bumps into a table, the table and any objects on it will move and make noise. This sort of carelessness will alert enemies to Alex's location. The game employs new fighting mechanics, including the abilities to dodge enemies and analog swing weapons, greatly improving the combat over other games in the series. Homecoming was also drastically updated in the visual aspect of the game, appropriate since the last console game in the series, Silent Hill 4: The Room, was on the PlayStation 2.

In addition, the game has five endings and bonus costumes.

After waking from a nightmare (which foreshadows the main plot of the game), Alex Shepherd finds himself in his hometown of Shepherd's Glen. He has returned to the town after time in the military. The town he returned to is nothing like the one he remembers though. A strange fog has settled over the town and monsters walk the streets. He returns home to find his mother ( Lillian) in a near-catatonic state. When he questions her about his younger brother Joshua she replies that his father went looking for him and that "he's gone, everyone's gone". Investigating the graveyard reveals the Mayor's behaving strangely. He is digging a grave in the cemetery and is unapproachable. Conversation with Elle Holloway (a childhood friend) reveals that people have gone missing from the town and nothing is how Alex remembers it. After acquiring a firearm from Curtis Ackers, Alex goes in search of Mayor Bartlett. Alex enters the Bartlett family tomb and finds a watch with no hands. The ticking of the watch causes Alex to pass out. When he wakes he finds himself in the town of Silent Hill. Entering the Grand Hotel he eventually finds the Mayor in the otherworld babbling about his son Joey and how Adam Shepard (the Sheriff and Alex's father) failed to protect the town. Upon being presented with the broken watch the Mayor discards it, inadvertently angering the monstrosity that serves as the game's first boss, a fleshy mass named Sepulcher. Upon defeating the boss Alex falls into the hole Sepulcher creates.

Alex regains consciousness in the Shepherd's Glen prison where he meets Deputy Wheeler. Upon convincing Wheeler of innocence he is released. The police station is then attacked by monsters. Elle then contacts Alex to tell him to meet her. Alex and Wheeler become separated and Alex eventually makes his way to the Parking lot where Elle is waiting for him in a car. They are attacked and escape to the sewers. In the sewers Elle and Alex become separated. Upon emerging Alex goes in search of Dr. Finch as Wheeler advised him to. He finds the doctor covered in blood outside his office. The doctor then runs away and Alex follows. After touching a doll that belongs to Scarlet Finch (Dr. Finch's daughter) Alex is transported to the otherworld. Here he begins a descent into a industrial nightmare. Here he finds Dr. Finch shirtless and bleeding from multiple self inflicted lacerations. When confronted by Alex the doctor begins a deranged rant about his daughter. Alex presents the doctor with the doll found earlier. As with the mayor this causes a boss to appear. The games second boss, Scarlet is a giant demonic porcelain doll that kills Dr. Finch and then proceeds to engage Alex in combat. When damaged the porcelain skin breaks and the doll bleeds profusely. This is symbolic and crucial to the games plot. Upon its death Alex sinks into the blood pooling out from the dolls corpse and returns to Shepherd's Glen.

Alex finds himself back in the room that he found the doll as if nothing had happened. The doll lies broken on the floor and Alex finds a key that was hidden in the body of the doll. This key opens a secret chamber in the Town Hall and Alex discovers a cult shrine devoted to deities that are associated with the town of Silent Hill. Alex returns home with this information, searching for clues about his families involvement with the cult. Alex discovers that Joshua was treated specially by his family and that he was ignored for a reason. He finds a letter from his father and a map of Silent Hill. This opens up more questions and Alex questions his mother about Silent Hill. Before she can answer him she is abducted and Alex is beaten and left for dead. He wakes up in a otherworld version of his house and eventually escapes, meeting up with Wheeler and Elle. They take a boat across Toluca Lake. They are ambushed by cultists and Alex falls into the lake in the scuffle.

Alex is washed up on the lake shore and makes his way into Silent Hill. Along the way he is radioed by Wheeler and is told that both Wheeler and Elle are in the prison. In the prison Alex fights off cultists and finds his mother in a strange torture device. Here the player is forced to make a decision. Lillian begs Alex to kill her quickly before the device kills her slowly and painfully. The player must decided if they can make Alex kill his own mother. Once Lillian dies the prison undergoes a otherworld transition. In the otherworld Alex finds Elle and Wheeler. They find Judge Holloway in the prison as well. She abducts Elle who drops her locket which contains an image of her sister. The game's third boss Asphyxia drags Wheeler through a tunnel and then reappears to fight Alex. Judge Holloway locks Alex in the room, grinning.

With the death of Asphyxia Alex escapes and finds himself in a church. Here he confronts his father twice. Once he finds his father in a confessional booth and has the option to forgive or curse him for his treatment of Alex. The second time they meet Adam is tied up and blocks Alex's progression. He is repentant and through the conversations the player discovers that Alex may not have been in the military at all. Adam seems to think that his son was in an insane asylum (referred to as a hospital) before the events of the game. Adam is then killed by Pyramid Head, the vengeful spirit of Silent Hill.

When Alex proceeds he finds that Judge Holloway and Curtis are trying to kill him in order to save Shepherd's Glen from the wrath of the gods worshipped by the cult. Alex saves Elle and has the option to save Wheeler from Curtis. Leaving Elle with Wheeler Alex proceeds, determined to find out what happened to Joshua. As he descends he finds a tomb in which the four founding families of Shepherd's Glen have marked the sacrificed children's names. Searching for his families section of the tomb he finds that he was the one meant for sacrifice. This triggers a flashback in which Alex inadvertently kills Josh in an accident on Toluca lake. Having found the truth about what happened to Joshua he faces the final boss. A representation of the fourth ritual sacrifice, death by drowning.

After defeating the boss the player receives one of the five endings for the game. These vary depending on the decisions made in the later stages of the game.

- All music composed by Akira Yamaoka.

- All lyrics by Joe Romersa. 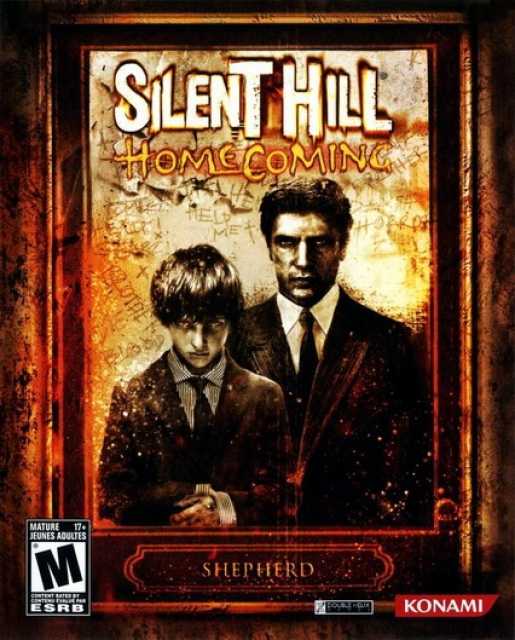