Turn back the clock yet again in EALA's third installment of the popular alternate-historical RTS, Command & Conquer: Red Alert 3.

EA's alternate-history real-time strategy series, Command & Conquer: Red Alert, has been dormant since the release of Yuri's Revenge in 2001. In early 2008, Red Alert 3 was formally announced for a "Red October" release on PC. The Xbox 360 version was released a month later and the PS3 version was on hold until March of 2009.

On the verge of being defeated by the Allies, Soviet leadership executes a desperate plan. The Soviets have secretly build a time machine underneath the Kremlin. Using this time machine, Soviet leaders travel back in time and kill Albert Einstein, thus removing all the technology that he would have built to help the Allies. Returning to the present, the Soviets are on the verge of conquering all of Europe. However, this time alteration has unwittingly created a new superpower, the Empire of the Rising Sun. Thus the world is plunged into a three way war.

The game features a roughly 10 mission campaign for each faction. The Empire campaign is locked until the player finishes the Soviet and Allied campaigns. There are three possible endings, each putting their respective faction as the victor of the war. The Allies' ending is the canonical one.

The colorful, campy feel of the Red Alert series will returns in Red Alert 3, ranging from full-motion video mission briefings and story sequences, as well as outlandish units. New to Command & Conquer is the option for cooperative campaign play. Players can play online with their friend, or choose to play alone, in which case an AI controlled Commander helps out. When playing alone, players can give some generic orders to their co-commander, such as attack specific target. Naval battles play an important role in Red Alert 3, with almost all multiplayer maps featuring large bodies of water for naval units. The game does away with the traditional fields of ore for resources and instead features finite ore mines that only require a single harvester.

The game features three factions, each with differences that dictate how they play. The Allies have unique technologies such as Prism beams and cloaking fields as well as being the air power faction. Soviets focus on brute strength with powerful tanks. The Empire has a strong navy and transforming units. Each faction builds and techs up differently.

The Allies build in the typical CnC style, but buildings will not expand the buildable zone of the base. Tech is upgraded via the MCV or the outpost and all buildings within the build zone will gain the benefits of tech making the Allies very versatile. However teching as the Allies is also the most expensive and time consuming.

Soviets have to immediately place their buildings and let them be constructed in the field. Buildings will increase the build zone however. Tech is upgraded via each production structure and is carried by future structures.

The Empire does away with the tradition CnC build method entirely. Instead the MCV produces mobile building cores which can be moved anywhere on the map before being deployed into buildings, which then take some time to construct. This allows the Empire to build anywhere although the farther away from the MCV, the longer the build time. Tech is cheaper than the other factions but it only applies to that specific production structure. This makes losing a Tier 3 factory very damaging because the Empire must not only rebuild the factory but also re-tech twice, during which time it cannot be used to produce units, to fully replace the loss.

Console editions of Red Alert 3 use a control wheel scheme from the console edition of CnC 3: Kane's Wrath with some slight improvements. Online Co-op matchmaking however is not implemented.

The Premier's Edition comes in a tin box, along with five exclusive MP/skirmish maps, a making of DVD feature, a feature entitled "Women of Red Alert 3", a soundtrack, a beta key for Command and Conquer 4 and the "Kossar's Helm" item for Warhammer Online: Age of Reckoning.

The beta ran from late July 2008 to September 29, 2008. Original end date was set to September 26, 2008, but EA extended the beta over the weekend. The beta was open for everyone who had registered their beta key acquired from either the Command & Conquer 3 Limited Collection or the Command & Conquer 3: Kane's Wrath expansion pack by September 15, 2008. The multiplayer beta comprised of four maps, two 2-player maps and two 4-player maps.

Released right after Spore, Red Alert 3 also uses the controversial SecuRom DRM. Users must authenticate online are only able to install the game five times. Any additional installs require contact with EA support. Uninstalling the game does not give back an install. Since release, patches have eased the stringent DRM, allowing uninstalls to give back an install and allow players to de-authorize the game. The Red Alert development team has stated that once the popularity of the game wanes and the servers go down, a patch will likely come out to remove the online authentication. The Steam version initially had SecuRom but is now protected through Steam.

C&C veteran composer, Frank Klepacki, returned for Red Alert 3 to compose 3 songs, Hell March 3, Grinder 2 and The Red Menace aka Nuclear Death aka Soviet Up Yours theme. British composer James Hannigan composed the music of the "Empire of the Rising Sun" faction and the game's Soviet March theme. Timothy Michael Wynn composed music for the Allied faction and some tracks for the Soviet faction.

The Apocalypse Tank is RA3's equivalent to the Mammoth Tank. It is effective against all other armored vehicles. Though slow, the Apocalypse can crush smaller tanks. The Apocalypse's secondary is a Magnetic Harpoon that draws enemy vehicles towards grinders in the tank's front, instantly killing the enemy unit on contact.

The Tank Buster, as its name suggests, uses its massive industrial plasma cutter to slice right through armored targets and structures. Busters can also burrow into the ground to prevent being run over as well as drastically reduce incoming damage. However they cannot fire while burrowed.

The Shinobi is a ninja! Their primary function is the same as that of the Allied Spy, but they are also armed with shurikens and a katana for instantly killing enemy infantry. Their secondary ability drops a smoke bomb, breaking all enemy units' targeting on them.

Yuriko is the Empire's commando unit. She uses her telekinetic powers to lift enemy units into the air and eviscerate them with the power of her mind. Her secondary ability unleashes a psionic shockwave, to damage and knock back all enemy infantry around her. Like all commando units, Yuriko is amphibious (in her case, by means of levitation).

Rocket Angels are female shock troopers equipped with exo-skeletal jetpacks that allow them to fly. They are armed with cluster-missile-firing Photon Rocket Launchers, making them good anti-vehicle and air units. Their secondary ability is a Paralysis Whip that disables a ground unit, preventing it from moving and attacking.

The Burst Drone is a robotic dragonfly used for scouting. It can attach itself to vehicles and slow them down. It can also self destruct to deal light damage. The Drone's advance sensors allow it to detect disguised Spies and Sudden Transports.

The Empire's engineer's primary function is the same as the other factions' engineers'. Its secondary ability allows the gangly engineer to sprint for a short period of time, after which he must stop for a moment to catch his breath.

The VX is a bird-like walking mech that can transform into a helicopter. While on the ground it serves as an anti-air vehicle and as a chopper, it is an effective anti-armor unit.

The Tsunami is the standard tank of the Imperial Army. Though not as well armored as the Allied Guardian or the Soviet Hammer, the Tsunami is amphibious. Its secondary ability activates Nano-Deflective Armor that increases the armor and the speed of the tank in exchange for disabling its weapon.

The most advanced ground unit in the Empire's arsenal, the King Oni is a terrifying lumbering mech that shoots laser beams out of its eyes. Its secondary ability causes the Oni to shoulder rush a target, smashing right through lower tier units and dealing significant damage to even tier 3 tanks.

Mecha Tengu is an amphibious assault mech armed with dual plasma cannons that rip apart enemy infantry. The Mecha Tengu can also transform into the Jet Tengu to be become an air superiority jet fighter.

The Empire's Ore Collector can flip its cargo bay to reveal an anti-infantry gun turret.

An unarmed amphibious transport. The Sudden Transport can disguise itself as an enemy vehicle to bypass defenses.

The Empire's artillery unit fires a slow-charging, but tremendously powerful particle beam that damages anything in its path. Its secondary fire mode increase the firing rate at the expense of attack power.

The Empire's naval siege unit, the Shogun is equipped with Shirada bombardment cannons. They are very destructive and precise. For their secondary ability Shoguns can ram other vessels, destroying them.

The Naginata is a fast-moving torpedo boat with rapid fire. The second ability is a spread-shot of torpedos. Naginatas are weak to attack from the air.

The Sea-Wing is a submersible anti-air unit. Like all subs, it must surface to fire and is protected against most attacks when underwater. It can transform into the Sky-Wing and fires an anti-infantry laser gun. 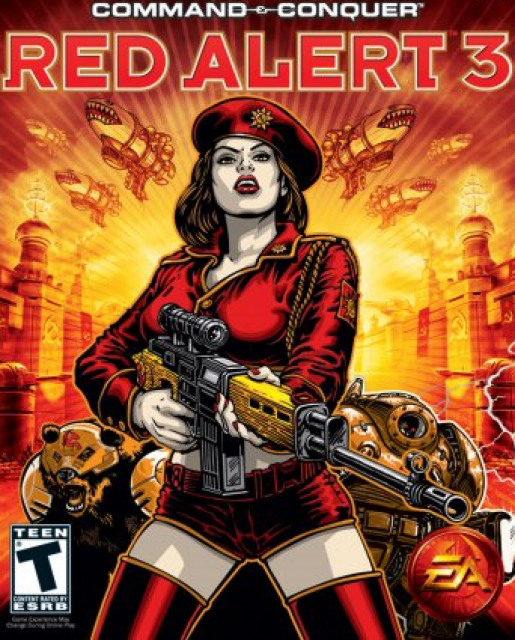