Skate 2 is a skateboarding game developed by EA Black Box for the Xbox 360 and PlayStation 3. It is published by EA and is the sequel to the game skate, released in late 2007. The game was released on January 21st, 2009 in North America and January 23rd in all other regions. Like skate, Skate 2 is a realistic take on skateboarding utilizing the flick-it controls. In this control scheme, the player's legs are mapped to face buttons, while their arms are mapped to the shoulder buttons, the board is controlled by flicking motions of the right thumbstick.

Skate 2 takes place five years after the events of the original game. In the time between games, the player has been in jail for attempting to skate down the San Vanelona Dam. Upon being released, he returns to San Vanelona to find a greatly changed city. A disaster had left the city in ruins allowing for the corporation Mongo Corp. to come in and rebuild it. The newly rebuilt city has been labeled "New San Vanelona" and, as the name suggests, the city has been greatly changed. The newly rebuilt city replaces the suburbs with "The Projects", a high rise residential area with large gaps and air time. An entirely new area has also been added, dubbed "San Van Mountain." This area can be seen in the skybox of Skate 1 and brings downhill gameplay at great speed.

San Vanelona is no longer a skaters paradise, however. The corporation Mongo Corp. hasn't taken kindly to skaters and has done things such as putting caps on many of the cities rails. According to a developer, the goal of the story will no longer be about proving your skill as a skater, as this was accomplished in Skate 1; rather the goal of the story will be about proving your worth as a skater to the community. According to a Gamespy article, the player will need to do challenges that will earn him money so that he can build skate parks and "stick it to the man."

Skate 2 has a number of new features.

The basic mode you'd find in any modern skateboarding game. The challenges are almost exactly the same as in skate. They include:

Freeskate mode lets your roam the city without having to worry about challenges. You can even skate as any of the playable characters (if you've unlocked them through career mode) if you want or your career skater. Freeskate mode will let you adjust the amount of pedestrians and traffic before you start. You can turn them both completely off if they get in your way and you can even turn off the mongo corp zones. Those are the areas that you're not allowed to skate at in the career mode.

There are multiple modes you can play online with up to six players. All modes can be played in ranked and unranked.

You can do whatever you want in this mode. Just skate around with other players and have fun. A player can also activate freeskate activities that other players can join if they want. Some activities are easy like "Everyone boardslide this rail" but there are more complex ones where all the players must nail a sequence of tricks.

In spot battle all players take turns and get 3 tries to set a high score on a specific skating spot. Some spots are "one trick only" spots, meaning you can only perform one trick on the spot and your turn is done. Some "one trick only" spots will allow you to manual and link your tricks but some will stop adding your points as soon as you start your manual. There are also "session spots". On these spots you have a time limit, usually about 45 seconds, to rack up as many points as you can on the spot. These spots are usually pools, fountains or verts.

Death Race are races down mountains and hills. Points don't count in this mode, just make it down to the finish line first.

In Jam mode there are 3 rounds where you try to score as many points as you can in the area you're at. All skaters skate at the same time in Jam. At the end of a round, the player with the highest score gets 6 points, the player with the lowest gets 1. Which ever player has the most of these points after all 3 rounds wins the Jam. There are other variations in Jam. Some rounds, instead of seeing who can get the most total points, you'll need to see who can do the most spins or who can get the most points from only grinding or the most points from only doing flip tricks.

SKATE is essentially the game of HORSE. A player will be asked to "set the trick". That player will need to do some sort of flip trick since grabs don't count. If the player lands the trick then the next player will have to copy his exact trick. If he doesn't copy the trick exactly then he will get a "S". If you fail at doing the tricks enough you will spell out SKATE and you will be knocked out of the game and have to wait for the next game to start. When a player is setting the trick he has to do something original. This means someone can't just keep doing triple kickflip 540s over and over. If a player repeats a trick his turn will be forfeited and it will be the next players turn to set the trick.

The Hall of Meat mode is about as easy as it gets. All players need to do is crash. The more damage you do to your body, the more points you get. The amount of points you get will also go up depending on how fast you were going when you crashed, if you hit objects, how many rotations your body does in the air and how long your wipeout lasted.

Party play is the local multiplayer mode. In party play you can play the modes Spot Battle, SKATE and Hall of Meat with up to 4 players. Your career skater won't be a playable character here but you'll be able to choose from 30 other skaters. The cool thing about party play is you only need one controller to play 4 player, you just have to pass the controller around. You can also play with 4 controllers if you want to.

Crashing has a new meaning in Skate 2. You can earn big bucks by crashing and doing Challenges which involve bailing in a specific way, this somehow implies that all skaters have impeccable insurance. You can access all of your bail statistics from Slappy's.

blog by clicking on the Annals of Meat.

The first of the three tabs is your "Top Bails" that Stores your top 10 bails and shows what bones you broke, when you did it, where you did it and how much damage you received.

The second tab is your "Bail Stats" which shows you all of you stats.

On your bail stats you can see:

Total Bails - This shows how many times you have fallen off your board overall. This usually outweighs all of the above listed bails, at a rate of about 3 to 1.

The third tab is the "Challenges" tab, which shows your progress in the Hall of Meat challenges. The challenges are separated into 4 groups: Points, Body Damage, Style and Grab Bag.

Skate 2 has an improved replay editor featuring three different camera types. You can use the normal game camera, a free camera, or a tripod camera. Each of these cameras can be aimed, and with the free and tripod cameras repositioned. The clips you make can then be uploaded to the skate.reel website. Additional cameras and clip space may be purchased in the Filmer Pack DLC available for both XBOX 360 and Playstation 3 consoles. The update adds much more customization to the cameras, allowing custom panning and paths. It also increases your clip allotment from the default ninety seconds to five minutes.

The following is a list of professional skateboarders in Skate 2:

The following is a list of skateboard companies in Skate 2:

The following is the soundtrack for Skate 2:

In the demo, you are essentially taken through the first 20 minutes of the game, when your narrator and filmographer, Giovanni Reda, drives you away from the jail where you have been incarcerated and San-Van has suffered massive reconstruction at the hands of MongoCorp (a large company bent on terrorizing skateboarders, despite having a skateboarding-derived name, wouldn't Uptight-Corp be a better choice? Or ParentCorp?). You are then reminded how to ride your board, and given instructions on how to get under a horizontal bar. All of this to a soundtrack of Wu Tang and WAR. You are then shown Slappy's park, which embodies the whole "skateboarding is still kinda punk" vibe. You are given further instruction on manuals, fliptricks, ollies and the like. All of the challenges you complete increase your time to skate afterward.

If you complete all of the challenges teaching you how to do tricks, you are given opportunities to skate for film and photography challenges, as Atiba and Reda aim lenses at you.

After all of this gamut and tutorials, you are given time to skate in Slappy's park, wreaking havoc upon the ramps and semi-street that litter the park.

The PS3 version of Skate 2 requires a 2182MB (just over 2GB) installation to run. The optional installation on Xbox 360 weighs in at 6.8 GB.

Achievements in Skate 2 are handled a little differently than in the first game. A larger portion of the achievements are tied to the main story line and other offline tasks. You no longer have to get footage rated or master all of the online disciplines to get a full 1000 GS. For a full list of Achievements/Trophies, check the guides at the top of the page.

During development, it was mentioned by Blackbox that downloadable content was to be a large part of the game. This is a major departure from the original Skate which saw none at all. Soon after release, the Filmer pack became available, offering advanced camera controls, custom watermarks, some new gear as well as an increased amount of footage time (from 3 minutes to 5) available to be uploaded to SkateReel. The Filmer Pack cost is 600 ms points, or $7.50 US.

On February 19, 2009 Skate 2 saw its first world expansion with Dyrdek's Fantasy Plaza Pack. This includes a recreation of Rob Dyrdek's Fantasy Factory skatepark which is the setting for his new show on MTV. Also included is the surrounding area modeled after portions of downtown Los Angeles. The cost for this is 400 ms points or $5.00 US.

On February 26, 2009, the San Van Classic Pack was released. This pack includes three areas from the original Skate: Parkade, Community Center, and Oliver Elementary School. This is priced at 400 ms points or $5.00 US. These areas, along with the Fantasy Factory, are not physically connected to New San Vanelona. The only way to access them is through a new downloaded section of the location list. All of these locations are available in freeskate, career, and online modes.

Accompanying these new packs are new filmer challenges, own the spot challenges, and jam session tournaments. Ten new achievements also join the ranks, bringing Skate 2 to 1250 total points. These are spread out through both content packs.

On March 5, 2009, The Throwback Pack was released. Originally obtained via special Pre-order codes from Gamestop, players may now download the pack free of charge. Contained within are new Retro clothes that can be used to customize the player's created skater. Clothes include new tops, sunglasses, pants and socks resembling fashion trends from the 70s and 80s. 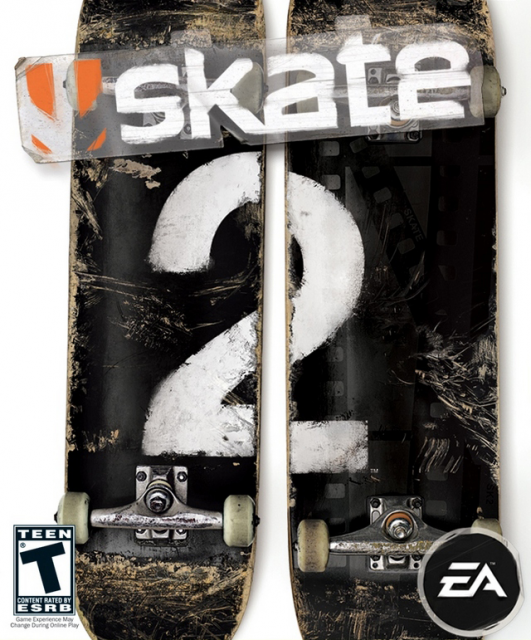