A sequel to the 1982 game BurgerTime, featuring a new cutesy art style, a new set of levels and gameplay features, and two-player co-operative multiplayer.

Super BurgerTime is a puzzle-platformer developed and released by Data East for arcades in 1990.

A sequel to the 1982 game BurgerTime, Super BurgerTime features a new cutesy art style, two-player co-operative multiplayer, and a variety of levels (split up into multiple "Worlds", each with a boss fight at the end). It plays similarly to the original, as players attempt to build large hamburgers by pushing each ingredient stack down platforms while handling sentient food (by avoiding them, stunning them with a salt shaker, or squashing them with ingredient stacks).

The game was later ported to the Nintendo Switch on May 17, 2018, released by Flying Tiger Entertainment as part of the Johnny Turbo's Arcade series, and was later included in the compilation Retro Classix Collection #1: Data East on October 1, 2020 (as well as the 2-in-1 Pack with Heavy Barrel).

Players take control of Peter or Pete Pepper Jr. as they try to make hamburgers. The object of the game is the same as the original BurgerTime, get all the ingredients of the hamburger to the bottom of the screen. This game adds a multiplayer mode that was not present in the original game.

Unlike the games predecessor players do not have to walk all the way across the ingredients, instead they must be jumped on a certain number of times. If one ingredient falls down on to another platform that still has an ingredient on it they will cause a chain reaction that will bump each ingredient in the chain down a level.

There are multiple worlds that are comprised of four separate stages, each with a boss fight at the end. 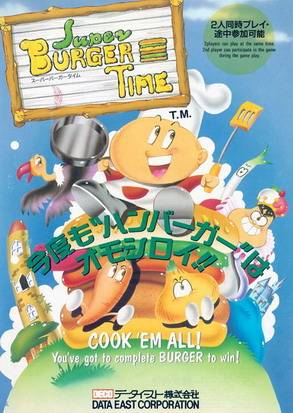