Released on November 13, 2003 in North America and March 5, 2004 in Japan, Double Dragon Advance is the first game to be released in the Double Dragon franchise in nearly a decade (with Double Dragon on the Neo Geo releasing in 1995). Exclusive to the Game Boy Advance, this game was developed by Million (which is the company that was formed after Technos Japan Corporation went bankrupt, previous developers of the franchise) and published by Atlus. The game is essentially a remake of the original Double Dragon arcade game, although it includes features and levels from many of the other games in the series.

The game was very well-received from fans and critics alike. Averaging a 75.00% from Game Rankings and Metacritic, critics were quick to praise the gameplay, graphical style, and overall presentation. The game was criticized for its length (at only eight stages), although most critics agreed that its well-executed gameplay outweighed the game's flaws.

When the game was released in Japan, there were a variety of changes and additions not found in the North American version of the game. The Sound Test mode found in Double Dragon Advance now no longer requires a password, there is a new Gallery mode that can be unlocked by completing the game on Expert, and the Special Thanks section now includes Bruce Lee (the game's style and box art are inspired by his movies) and Yoshihisa Kishimoto (who directed the original arcade game). Additionally, there are minor enemy changes to fix balancing issues.

Following the same plot as the original arcade game, Billy Lee and Jimmy Lee have to fight a gang known as the Shadow Warriors in order to rescue Marian. If the game is played in cooperative mode, the players face off against each other after the final battle, fighting for the love of Marian.

In addition to the inclusion of new stages, the moves and abilities of the Lee brothers are vastly expanded. Other than the default kicking and punching (and slight variations on these, e.g. back kicks, jump kicks, etc), Double Dragon Advance introduces and reintroduces many moves. The blocking feature from Super Double Dragon is retained, allowing players to combo into grabs and other attacks by holding the L button. Additionally, moves from Double Dragon II: The Revenge, as well as other Technos games such as Renegade and The Combatribes, are included (e.g. uppercuts which can be performed by holding A and B simultaneously, jump stomps, and many more).

Naturally, there have been new weapons created for Double Dragon Advance. In addition to weapons from previous games (ball and chain, whip, baseball bat, axe, knives, dynamite, and nunchuks), there are new weapons such as the kali stick.

There are a variety of modes in Double Dragon Advance beyond the single player story mode. There is also a mode where one player can alternate control between the two brothers, although this leaves on brother immobile at all times. Naturally, the game has support for the Game Boy Advance Link Cable, allowing for cooperative play. Another single player mode is also available, allowing one player to fight in a survival mode. In this mode, the player is trying to defeat as many enemies as possible in one life, receiving a rating at the end of the game.
Final Fight One River City Ransom Renegade Teenage Mutant Ninja Turtles: Turtles in Time Teenage Mutant Ninja Turtles: Turtles in Time Re-Shelled Streets of Rage Streets of Rage 2 Streets of Rage 3 Final Fight Final Fight: Double Impact Final Fight 2 The Tick One Piece Dragon Ball: Advanced Adventure 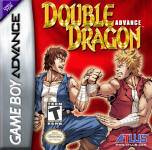