The Chronicles of Riddick: Assault on Dark Athena

Both a remake and expansion to the critically-acclaimed Xbox and PC title The Chronicles of Riddick: Escape from Butcher Bay, Dark Athena features both the original campaign, an all-new campaign and new multiplayer modes.

The Chronicles of Riddick: Assault on Dark Athena is a remake of the critically-acclaimed Xbox game Chronicles of Riddick: Escape From Butcher Bay, developed by Starbreeze Studios. The game features the entire Escape From Butcher Bay campaign(which has been improved from the original Xbox version), which can be selected when starting a new game. It isn't required to play through the Butcher Bay portion of the game in order to access the new campaign, Dark Athena.

The game puts you in the shoes of Riddick, a deadly fugitive who is wanted by every prison and every bounty hunter in the galaxy. The only problem is keeping him locked up. Butcher Bay and its expansion Dark Athena take you through the seedy world of the Butcher Bay jail, aboard the merc ship Dark Athena and across the world of Aguerra where you'll hack, slash and snap the necks of every no good in-mate, guard and solider who gets in your way of freedom. The game is a mixture of stealth, shooter and melee combat.

The Chronicles of Riddick: Assault on Dark Athena is similar to it's predecessor, although some notable changes have been made. One of the most important differences is removing the DNA restricted weapons . Though early on in the Dark Athena campaign the player must rely on melee or picking up guns attached to the clone enemies.Then, at a certain point weapons can then be picked up and used unlike the first game which required a DNA input.

The weaponry list (both projectile and melee) has also expanded and the player has access to a significantly more sophisticated arsenal . Assault on Dark Athena is somewhat less linear than Escape From Butcher Bay. Though the game includes much more shooting action than Butcher Bay which had a more significant amount of stealth.

This a standard Team Deathmatch

Named after the first movie featuring Richard Riddick, this mode is similar to the 'Juggernaut' mode in the Halo series. In this mode, the map has very little light, most of the players are guards while one is Riddick. Guards are equipped with guns and flashlights of limited effectiveness, while Riddick is armed with his Ulak blades and can use his Eyeshine ability. Guards must work together to take Riddick down, while he attempts to kill as many guards as he can. If a guard kills Riddick, he immediately respawns as Riddick.

Arena is a one-on-one or two-on-two elimination matches inside a small, contained map, with the other players spectating until it's their turn to throw down.

There is a playable demo, available now, on the Xbox Live Marketplace and PSN.

The Chronicles of Riddick: Assault on Dark Athena requires 6.7GB of space to install on an Xbox 360 HDD. 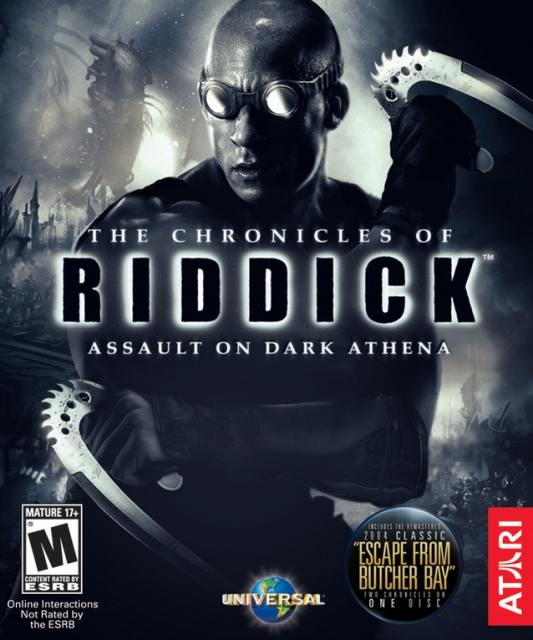