The fourth Pro Skater game changes up the single-player structure, while making some tweaks and additions to the established skating gameplay.
Game Boy Advance

Tony Hawk's Pro Skater 4 is a skateboarding game developed by Neversoft and published by Activision (under their Activision o2 label) for the PlayStation 2, Xbox, and GameCube on October 23, 2002. The fourth installment of the long-running Tony Hawk franchise and the sequel to Pro Skater 3, Pro Skater 4 was the last main game in the franchise to bear the Pro Skater name until Pro Skater 5, adding new levels, skaters, and tricks (such as Flatland Tricks, Grind and Lip Trick Extensions, skitching vehicles, and Spine Transfers, which allow players to switch between connecting quarter-pipes or self-right themselves to exit quarter-pipes without bailing), as well as a new Career Mode system (where players skate around levels similar to Free Skate mode, and are given objectives and mini-games by talking with NPCs). A limited version of Tony Hawk's Pro Skater 2's currency system returns (by completing objectives and special mini-games, as well as collecting cash pickups, players can buy clothes for the Create-A-Skater mode, decks, movies, cheats, secret skaters, and hidden levels).

The game was ported to the PlayStation alongside the original release, and came to PC in 2003. The PlayStation version runs on a slightly-modified Tony Hawk's Pro Skater 3 engine, changing the level structure of most levels while replacing the Zoo, Carnival, and Chicago levels with two new levels: Sewers and Little Big World (the counter-tops of a giant kitchen).

Handheld versions were released on both the Game Boy Advance and the Zodiac in 2004. Both games feature a 2D isometric viewpoint, and carry over several elements from the console versions.

As in THPS 2 and 3, hidden crossover characters are included: Jango Fett, a bounty hunter from the Star Wars franchise, and Eddie the Head, mascot of the band Iron Maiden.

The core skating mechanics are mostly unchanged from previous games, but one major new feature is the spine transfer, which allows players to either switch to a ramp on the other side of a vert, level off when launched away from a ramp, or land correctly into a ramp if entering from a flat area.

Also new to the game are pogo tricks, performed during manuals by tapping one of the face buttons. Depending on the trick, the skater will perform a handstand on the board or stand on the side of the board. Extensive use of the pogo system is effective during combos.

The way goals are received is much different from previous games, adopting a sandbox-style system where goals are given by characters around the level. Completing a goal is rewarded with stat points that can assigned, and sometimes special trick slots. The game also reintroduces the concept of money, which was present in THPS 2 but not 3. Small amounts of money can be found throughout the level, usually by going up a ramp or grinding rails.

Each skater, including the custom skater, has a unique "end" goal, which is often very elaborate. Completion of the goal nets a highlight video of the chosen skater, if using a pro skater.

In the game's Create-a-Skater mode, apparel can be unlocked to create Officer Dick and Ollie the Magic Bum from Tony Hawk's Pro Skater 3. 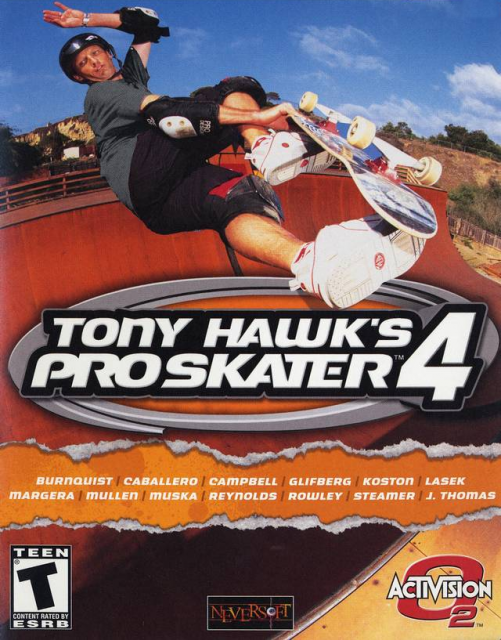