As the dawn of war approaches, take control of one of many different futuristic armies and races from the 41st millennia and wage war against your enemies!

Warhammer 40,000: Dawn of War is a real-time strategy game made by Relic Entertainment based on the popular table-top miniature game, Warhammer 40,000 by Games Workshop. Dawn of War brings together the Space Marines, the super-soldiers of the vast Imperium of Man; the Chaos Space Marines, Marines that have succumbed to the evil call of the Chaos Gods; the Orks, the fierce and numerous green-skinned fighters; and the Eldar, a wise, yet merciless elf-like race.

Dawn of War was followed by three expansion packs, Winter Assault, Dark Crusade, and Soulstorm, as well as several re-releases bundled with those expansions. In 2008, Relic officially announced a much-anticipated sequel, Warhammer 40,000: Dawn of War II, which received its own expansion packs, Chaos Rising in 2010, and Retribution in 2011.

The Space Marines are the strong-arm of the Imperium of Man, composed of genetically and surgically modified super-soldiers. The Space Marines are descendants of the Imperium's God-Emperor of Man, who, in an attempt to unify the galaxy under humanity's control, created several superhuman "Primarchs" that were cast across the galaxy and would later found the Space Marine legions through similar methods the Emperor employed. For many years, the Primarchs and the Emperor fought in a Great Crusade to unify the galaxy, but slowly the forces of Chaos began to taint several of the Primarchs and before too long, the Space Marines began to turn against each other. In a time known as the Horus Heresy, one Primarch, Horus, marched on Holy Terra and engaged the God-Emperor in combat. The forces of Chaos controlling him, he fought the God-Emperor to the death, and although the Emperor was victorious, it was a Pyhrric victory. The Emperor, slain by his own son, was interred upon the Golden Throne, left in a state between life and death. The Space Marine legions that did not succumb to Chaos were broken into smaller chapters, with no singular leader ever controlling so much power ever again.

Now, in the 41st Millenium, the Space Marines continue the vision of the Emperor, crusading to cleanse worlds and unify humanity. They also act as a defence force, engaging foes that would otherwise crush the forces of the Imperium.

In Dawn of War, the Space Marines are all about making use of their strong infantry backed with vehicle support. The Space Marines have the ability to "Deep Strike" their forces into combat if they have a visual on the location, allowing players to flank and launch suprise attacks on their foes.

The Chaos Space Marines are legions of Space Marines that succumbed to the call of Chaos. During the Horus Heresy, nine Primarchs turned against the Emperor, taking their Space Marines legions with them. They pledged loyalty to the evil Chaos Gods and began worshipping them, in order to gain corrupt powers to use to further the goals of their Gods. The four Gods of Chaos are Khorne, the Blood God; Tzeentch, the God of Lies and Manipulation; Nurgle, the God of Disease and Decay; and Slaanesh, the God of Self-Indulgence and Decadence. Many followers of Chaos may choose to follow a specific God, granting them certain abilities in combat, while others stand under the banner of Chaos Undivided, who received different benefits from not choosing a specific God.

The Chaos Marines remain locked in combat against their former brothers-in-arms, attempting to spread the word of their Gods, Chaos and destruction.

The Chaos Space Marines are more focused on the strength of the Chaos Marine squads throughout a game, while bringing in their more bloodthirsty and demonic units as the match progresses.

The Orks are a green-skinned race with near-limitless numbers. The Orks were created as a last ditch attempt to keep the Necrons from taking over the Galaxy by the "Old Ones," or "Brain Boyz" in Ork lore. The Orks reproduce through releasing spores, which means they are very difficult to eliminate once they have settled on a planet. Orks follow no particular banner, instead coming together as the need arises to defend themselves and their territory or to mass-migrate to a new location, which they call a "Waaagh!!!" Due to their lack of formal organization and their desire to have the biggest, the shootiest, or the choppiest weapons, an Ork army lends itself to a very ragtag and random appearance. The Orks aren't homogenous in racial structure either, an Ork army consists of certain subspecies such as Squigs, Snotlings and Gretchins.

In the 41st Millenium, the Orks are as numerous as ever and are always looking for a reason to start a new "Waagh!" against their " 'Umie" (Human) neighbors in the galaxy.

The Orks in Dawn of War are all about large, overwhelming numbers. They may not have as much sophisticated technology, but they more than make up for it in brute strength and large numbers.

The Eldar are an ancient race of elf-like humanoids created by the Old Ones to combat the Necron threat ages ago. They had, for many millenia, been the strongest and most advanced race in the galaxy. During the 30th Millennium though, many souls of dead Eldar began to coalesce and form Slaanesh, one of the Chaos Gods. Slaanesh represented the pinnacle of the taint and depravity that had infested Eldar society and before long, Eldar society collapsed. Those that remained after the collapse either lived upon the Craftworlds sent out before the degeneration of the Eldar Empire had undone itself, or lived on Exodite worlds, worlds inhabited by Eldar that fleed their collapsing society before the worst came to pass. Now the remaining Eldar follow a Path system, a system in which the remaining Eldar of a Craftworld choose to focus entirely on a single skill and master it.

The Eldar that remain stick rigorously to their Path-dedicated lives, and if the needs arises, take up arms to combat new and ancient threats alike.

The Eldar focus on hitting fast and hitting hard. They are very mobile and very elusive, which can allow players to wear down their opponent with constant, light skirmishes before finishing them off in a swift killing blow.

Dawn of War plays much like other Real-Time Strategies but attempts to bring players into conflict much faster than most RTSes. There is a heavier emphasis on combat than there is on managing your economy. Two resources exist, Power and Requisition. Power is obtained by construction Power Generators or Thermoplasma Generators if there is a resource-rich slag deposit available. Power is used in research and most advanced units and technologies, which means that it gains value as a battle continues to drag out. Requisition is gained through more direct means. "Strategic Locations," "Critical Locations," and "Relics," across a map can be captured by most basic infantry in a player's army, and once captured will begin to produce Requisition for that player. Fortifying a strategic point or a relic with a "Listening Post" will increase the amount of Requisition that point produces. Critical Locations cannot be foritfied and must be defended in another manner. Requisition is used in essentially anything a player could build, be it workers, infantry or buildings, making it the key resource throughout a match.

Base construction is managed by a builder point and must be done within a "Control Zone" that is projected either by a headquarters building or any and all Strategic Locations, Relics and Slag Deposits that a player controls. From their base, players can construct various infantry and vehicles. Most vehicles and infantry in the game can be outfitted with "Wargear" which can specialize or increase the damage their attacks deal. Similarly, all infantry squads can be reinforced, which increases the squad's survivability and damage. Some squads may begin fully reinforced, while others may have to be reinforced after entering the battlefield. Squads can be reinforced at any time. Both reinforcement and wargear upgrades cost small amounts of resources, but can greatly increase the effectiveness of your units in battle. Dawn of War also implements a cover system, although not as sophisticated as the one seen in Company of Heroes. Units can be ordered into "Heavy Cover" which provides them with some defense against incoming attacks and conversely, units can be left exposed, such as in shallow water, where they will take more damage from incoming fire.

The Dawn of War single player campaign puts players in control of the Blood Raven Space Marine chapter as they come to relieve a besieged Imperial Guard unit on the planet Tartarus from an Ork "Waagh!!". It is a story-driven mode broken up into several missions with multiple objectives for the player to complete. While exploring the planet, players will encounter the Orks, Eldar and the traitorous Chaos Marines, all while holding Tartarus against these various units and protecting the guardsmen stationed on the world. 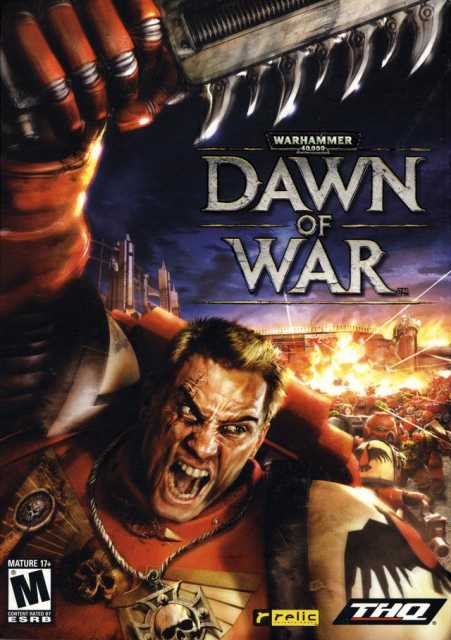