Portal: Still Alive is a puzzle game developed and published by Valve Corporation for Xbox 360.

The game is not the sequel to the first Portal game (an honor which instead goes to the 2011 game Portal 2), but is instead the original Portal along with additional levels and challenges. The map pack has no direct story ties and is in fact a port of a fan based map pack released on the PC.

Portal: Still Alive was announced at the Microsoft press briefing at E3 2008. The game was released on the Xbox Live Marketplace, on October 22, 2008 at 2:00 am PDT for 1200 points ($15 USD). It also features an entirely different achievement set than the release of Portal in The Orange Box, with the one exception being the Vanilla Crazy Cake achievement for beating all 6 of the advanced chambers.

The game is a port of a well known fan based map pack known as Portal: The Flash Version Map Pack . The pack is, in turn, a 3D recreation of a Flash-based 2D fan game called Portal: The Flash Version into Portal. The game is based entirely off of the mechanics shown in the first Portal trailer as well as Narbacular Drop and was released a few days prior to the release of The Orange Box. 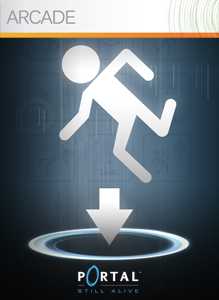