Crash Bandicoot Nitro Kart 3D is a racing game developed by Polarbit and published by Vivendi Games Mobile for iPhone, iPad, and N-Gage. The game was published by Activision Publishing with Tec Toy doing porting work for the Zeebo.

There are different locations on the screen to tap for different commands. A tutorial comes up straight away after the first time playing after purchasing explaining which locations to tap on the screen. The game accelerates automatically making it crucial to stay focused on turns. Throughout the games there are 'Boxes' that you can crash into. These boxes either contain the famous fruit from the franchise Wumpa Fruit, or the crate with the question mark giving you items to shoot or drop.

The game is broken down into four different ways to play; Quick Race, Cup, Story or Time Trial. Quick races are just single races that don't affect stats or anything, Pure fun, Pure racing. Next you have the Cup Races which are just tournaments. There are three different cups each including four levels in each. After clearing all the Cups you go onto the story mode. This is just a simple back story for why you would be racing. It includes boss battles which are just racing with a specific opponent. After completing the story mode the final and last way of playing is unlocked. Time Trials, set records of specific races with people worldwide and see if you can be the fastest out there.

Additional characters were added in an update to the iPhone version of the game in June 2010.

Crash Bandicoot Racing 3D features 3 cups, consisting of 4 tracks each. Leaving racers with a total of 12 tracks to choose from. Even though the tracks are essentially remakes of tracks from Crash Tag Team Racing, they were give new, much more generic, names.

N-Tropy Cup - Too Easy For Grandma 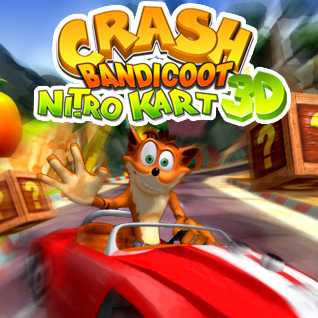