Jump Super Stars is a 2D fighting game for the Nintendo DS. It features many characters from popular Shonen Jump series. It was only released in Japan and will not be released elsewhere because of cross-licensing issues.
Nintendo DS

Jump Superstars is a fighting game featuring characters from Shonen Jump comics, released only in Japan.

Imagine the wild, up to 4-player gameplay of Super Smash Bros; only you can switch between 3 or 4 different characters on the fly by pressing their pane in the manga-themed touch screen (main gameplay is in the top screen), and can also call in support characters (ala Marvel Vs Capcom) to attack your enemies, heal you, or do other stuff by pressing their pane. Finally, you have help characters that don't appear on-screen, but in-game you press their pane to give your playable character stat boosts such as more speed, more strength, brief invisibility, and others.

The bottom screen that houses these panes for playable characters, support characters, and help characters is called the 'deck'. It is a 5x4 grid (which holds 20 squares), and you make and name your own decks by choosing panes and arranging them in your deck. Certain characters are 'related', that is, by placing them next to each other they gain stat boosts (usually a longer health bar). Half the fun is making your own decks is finding 'chains' of characters that give each other boosts, and figuring out how to get them arranged properly (since the panes are specific tetris-like shapes) so that all related characters are next to each other. The panes are of different sizes: a 1-square pane is a help-pane, 2-3 square panes are support panes, and 4-6 square panes are playable characters. Each character has multiple panes that are unlockable (but only a max of one for each pane size).

The game follows a similar KO system as Super Smash Bros, except Jump Superstars has health bars, and if they empty the character is KO'd. You have the same kind of attacks (where pointing the d-pad in a different direction while pressing an attack button does a different attack), and there are three attack buttons: weak, strong, and special (which uses your special bar). Calling in support characters also uses the special bar, but the bar can be refilled by attacking regularly, or picking up items. There is also a super-special attack called a Dream Combo where you attack with multiple playable characters in one chain - performing it is easy; just press your current play character, then any number of other playable characters, then to finish you press the original character again.

An important part of gameplay is switching between your playable characters - in some levels you automatically lose when one of your characters are KO'd, so you must switch out injured characters. Also, since each character is different, once you learn their strengths and weaknesses you can switch to the most appropriate character based on your opponent, or the current situation.

As you progress through the single-player mode, you are constantly (and very quickly) gaining new characters and new panes (which must be initiated by putting the correct character portrait into the grayed-out pane, which then colors the pane and activates it for use). The levels in single-player are a mix between simple battles and mission-based levels. For mission levels, you must complete a certain objective to win. However, for both types of levels, there are 2-4 bonus objectives (such as winning without being KO'd, or landing x amount of a certain type of attack, among MANY others), and completing these bonus objectives nets you more characters and more panes.

What is Jump Superstars?

Jump Superstars is a 2D fighting game that plays similarly to Nintendo's Super Smash Bros. The game features a variety of playable characters from various different manga that fall under the Weekly Shonen Jump banner. 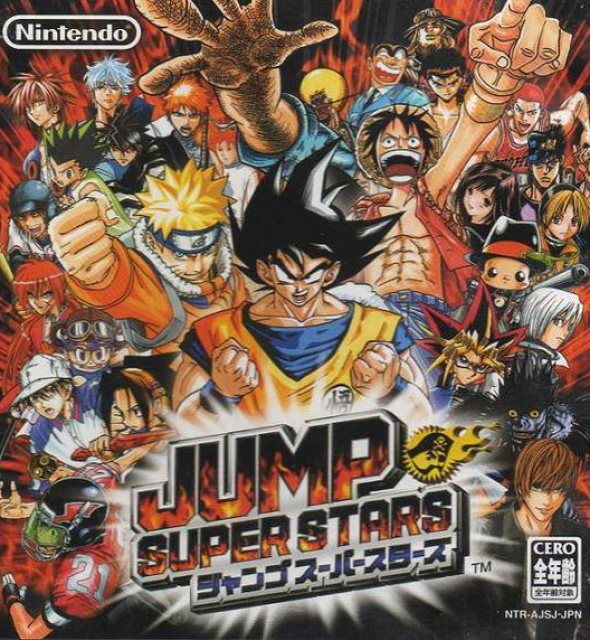