You are the Pokémon in this dungeon crawling spin-off of the immensely popular RPG franchise.
Nintendo DS

The storyline plays out throughout the game and technically never ends. You start out, like the first game, as a pokémon without a name (which you pick at that point) and a memory. Whatever partner pokémon you then choose will find you and will. He will tell you who he is and what his dream is (becoming an explorer). You then go to the guild and get let in to apply as apprentices to the guild. You will then take on several mission making a small sub-story that will cross with the main story. After a while you will find out that a pokémon named Grovyle. As the game progresses you try and stop Grovyle from taking all of the time gears which, once taken, freeze time in that area. You will cross paths with bosses like Groudon, Mespirit, Uxie, and Azelf. You will also gain an ally pokémon who says he has been chasing after Grovyle. Once Grovyle tries to take Azelf's time gear you, your partner and Dusknoir (the new ally) battle and capture him. Once the battle is over you are taken back to the town where their is a cut scene. During this Dusknoir reveals that he and Grovyle are from the future then right as Dusknoir is about to take Grovyle through a portal to the future Dusknoir attacks and drags you along with him. Now you find out from Grovyle as you are being tortured that you were once his human partner and something happened as you tried to travel back in time that turned you into a pokémon. So you guys eventually escape and you break out of the future with the help of Celebi. When you return, even though you are reluctant you take Grovyle to the guild where he is accepted as a friend. Afterwards you try to discover how the now collapsing Temporal Tower, home of the controller of time: Dialga. Wigglytuff, the guild master take you to Lapras, one of his great friends. With the help of a relic, that your partner had found and cherished since before you arrived, you are guided to Temporal Tower where you will battle the somewhat brainwashed Dialga to save the world from the distortion of time forever. During this Dusknoir attacks and tries to send you back to the future, but Grovyle sacrifices himself and send himself and Dusknoir into the future. Once you beat Dialga you go through a cut screen. This time like the first game you will start to disappear and your partner will be sad especially since you knew you would most likely disappear. However you come back and Wigglytuff makes you and your partner an exploration team. You will then have to do random quest for a while including one that includes the manaphy egg(which will hatch into a Manaphy after awhile and then will leave) until one of the pokémon Azumarill falls into an almost never ending nightmare. So you set out to find one of your old opponents (by the way this character had kidnapped the Azumarill), Drowzee, Once you have found him he will gladly help and send you into the nightmare with his powers. Once in the Nightmare you run into Cresselia who will say he is one of the guardians of space and says all of the planet will be covered in darkness unless you disappear. Luckily Drowzee is able to pull you out of the nightmare. That night you contemplate what Cresselia had said compared to what she had told you in dreams you had. (Which happened a few quest before all of this began) and something didn't add up. When you fall asleep Cresselia enters your dreams and tries to attack you again but this time Palkia the controller of all of space shows up to deal with you himself. He takes you to his domain where you fall to the near bottom floor and start to descend. Once you reach the bottom Palkia appears and you fight. After the fight Palkia cant believe you have beaten him. Cresselia then appears and Palkia ask him to take care of you. Before that happens another Cresselia appears (the real one) and attack the other one who turns out to be, Darkrai the person who has not only been causing the nightmare but also attempted to destroy Temporal Tower to gain control over the world. He then tells you where he is fleeing to a leaves. At the same time Palkia falls into a nightmare like Azumarill (who is has awakened from his nightmare because of you entering into his nightmare) and Cresselia ask you to help him defeat Darkrai even though it is a trap. So you go to Darkrai's layer and find out you got turned into a pokémon because of an attack Darkrai had cast towards Grovyle that you shielded him from, knocking you around in the dimensional vortex that you where traveling through. During this time Darkrai has put you into a nightmare but you break free and attack Darkrai. After defeating him you and your partner will do a few more missions until Manaphy appears on the beach again and everyone is happy to see him. Which will set off a special quest to Phione.

A follow up to the 2005 duo of Red Rescue Team and Blue Rescue Team, the Explorers of Time and Explorers of Darkness aim to expand on the rogue-like gameplay of their predecessors. The games add the fourth generation of Pokemon found in the Diamond and Pearl games of the main series. As with the previous games, players control a human who has been turned into a Pokemon and a personality test at the start of the game determines which of the 16 possible species they will become.

The main focus of the gameplay is on gathering missions from the town noticeboard, which take place in randomly generated dungeons with the combat being more action orientated than in other Pokemon titles. If either the player or their partner runs out of health during the mission they are removed from the dungeon and must start again at the beginning, losing half of what they were able to gather.

As a part of the guild you can choose missions to take on to advance in the main game or gain items. There are two types of missions as the main character you can choose from. One being a regular mission where you rescue a certain pokémon, retrieve an item, reach a certain level of the dungeon, etc. The second type of mission is an outlaw mission where you participate in defeating the an outlaw. Missions are required to be done to advance in the storyline especially at the beginning. To find missions either go to the Job Bulletin Board or the Outlaw Notice Board. Note that there are rewards after missions but the guild takes a portion of the money you earn from that mission.

There is you and your partner but there are also some other notable characters that are a part of the guild.

Kangaskhan would be the place to go to in treasure town when needing to store items or TM/HM.

Will show the explorers what is inside treasure boxes.

Go to Kecleon's store for dungeon items and preparing for bosses.

Hold money here so if a character is KO'd in a dungeon he/she will not lose money.

Link moves so moves can be used in a chain in one turn.

Chansey will take care of eggs until they hatch.

Owner of the dojo you and your partner can train in.

Deliver outlaws/fugitives to Magnezone to collect a reward.

Treasure Town can be used as a place to gather information on certain missions or after story plot. Be sure to speak to the townspeople often to figure out what has been going on recently if lost in the plot of the game. 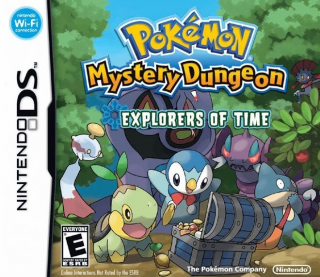